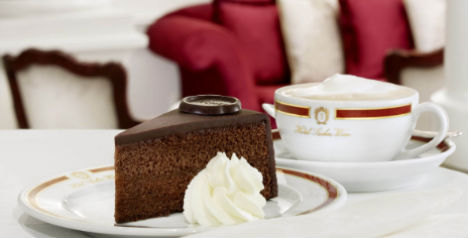 Poignantly, the announcement was made just a day before Doughnut Day, a day of doughnut celebration in the United States that takes place the first Friday of every June.

Making the announcement, the business bosses admitted there had been “markedly weaker sales than expected” with a lack of interest from Austrians in the colourful and sugar-heavy doughnuts.

With sweet-toothed Austrians famed for their fancy cakes, Dunkin Donuts probably thought they would make a killing in the country. The Local Austria can reveal, however, there are some unwritten rules about sweet snacks that the American company might not have realised: It’s recommended that cakes or sweet snacks claim some connection – however weak – to a member of a royal family. The Sachertorte was famously created in 1832 for Prince Wenzel von Metternich by a 16-year-old apprentice after the Prince’s head chef fell ill. As legend has it, the Prince demanded: “Let there be no shame on me tonight!” No pressure then.

The delicious Kaiserschmarrn was also named after Franz Joseph I of Austria, who loved a bit of shredded pancake. The same Kaiser also liked to snack on Gugelhupf for breakfast, giving this sponge cake its own royal connection. Although Dunkin Donuts had a Bavarian creme on their menu, someone probably should have told them a Kaiser creme would have been a better way to go.

2) What, no cheese?
A visitor to one of Vienna’s numerous coffeehouses or Konditoreien will have undoubtedly seen the word ‘Topfen’, the Austrian name for what Germans call Quark. This curd cheese filling appears in lots of top Austrian sweet snacks, including Topfennockerl, Topfenstrudel, Topfengolatsche, to name a few. A few Topfen options at Dunkin Donuts might have gone down a treat.

Austria’s love of curd cheese can only be matched by their love of ‘Mohn’ – poppyseed. To the uninitiated, this brown filling looks deceptively like chocolate. Be warned, it tastes nothing like chocolate. Perhaps the Marmite of Austria, people either love or hate this stuff but you will find it is stuffed into pastries of various shapes and styles so watch out if it is not to your liking.

4) A bit of controversy
It’s not just taste that Austrian’s disagree on when it comes to cakes. Desserts in the country also come with their fair share of legal and moral problems. Hotel Sacher and Cafe Demel famously battled over who had the right to call their Sachertorte the ‘original’ one, with the legal battle running from 1954 to 1963 (Hotel Sacher won in the end).

The widely-served Mohr im Hemd also sometimes raises an eyebrow. The name of this chocolate sponge pudding served smothered in cream translates literally as ‘moor in a shirt’.

Legend has it that in 1888 Verdi’s Otello was performed at Vienna’s court opera for the first time. In memory of the main character many Viennese cafes reacted by creating this sweet homage – and the dodgy name has stuck.

It is definitely delicious but is it discriminatory? We’ll let you decide. Thinking about it, perhaps it was good that Dunkin Donuts didn’t to go down this path.

5) Doughnut are a seasonal thing Austrian doughnuts – known as Krapfen – are consumed in great quantities during Fasching (carnival time) in February. Austrians do eat doughnuts other times of the year but it’s kind of a seasonal thing. With 100 million Faschingskrapfen consumed in Austria every year – that’s around 12 doughnuts per person – maybe there just wasn’t enough room to squeeze in a Dunkin Donut.