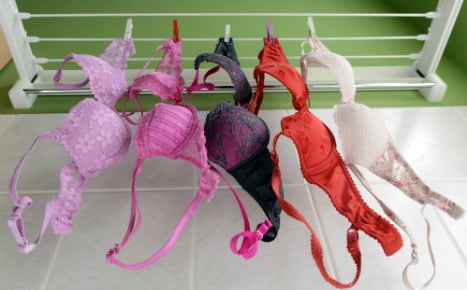 When a young police cadet's bras kept going missing from her apartment in Gelsenkirchen, North Rhine-Westphalia, she was stumped to explain why.

Then, on Rosenmontag (Rose Monday, the high point of the Karneval season) the 22-year-old got a phone call from her neighbour while out on duty.

The conscientious neighbour had taken a look through the peephole in her door and seen the cadet's ex-boyfriend leaving her apartment.

Other witnesses confirmed that the 29-year-old trainee police inspector had repeatedly appeared at the building.

When police searched his house, he handed over a bag with 15 bras in it and a key for his ex-girlfriend's flat, which he had made for himself from the original.

His seniors first suspended the young cop, then fired him.

Unwilling to accept the decision, he took them to court.

On Thursday the administrative court in Düsseldorf considered the case.

The plaintiff himself failed to appear, sending his mother along as a witness instead. She swore that her son had been with her on Rosenmontag.

First they had eaten breakfast together, then he had brought her to work at a shopping centre where they met a common friend, she recounted.

The friend confirmed the meeting to the court.

In the end it was one side’s word against the other’s.

“I’ve been a judge for 13 years and a case has rarely been made so difficult for me,” said judge Andreas Müller.

But in the end he decided: “We don’t believe the mother.”

The young man might have been able to drive his mother to work after he broke into the apartment, but he couldn’t have had breakfast with her, the judge argued.

The neighbour had taken pictures of the break-in through her peephole and was certain of who the culprit was, having recently chatted with him about holiday plans.

And Judge Müller didn’t mince his words when it came to describing the young lingerie lover.

He had “considerable character flaws”, was a stalker and a liar, and made fun of homeless people in front of colleagues, said the judge.

Furthermore, he had lied about failing a shooting test and had tried to defame another trainee – things his bosses at the Bill didn’t have to tolerate, Müller added.

But to explain for the bag of 15 bras, the young man’s lawyer had argued that the 22-year-old woman had left piles of her clothes at his apartment and regularly slept there.

His ex refuted that she had ever left her bras at his house.

“I always used to wash them myself,” she told the court.