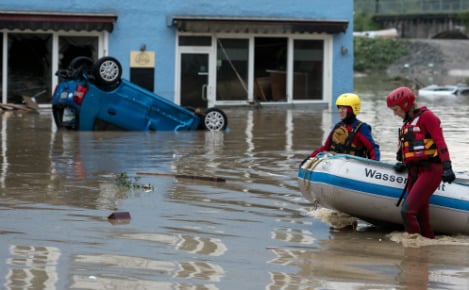 A river rescue team moves through the streets of Simach am Inn with a boat on Thursday morning. Photo: DPA

Rescue teams dug the body of a 75-year-old man out of the debris in the town on Thursday morning, broadcaster N-tv reports.

“We fear the worst,” a police spokesperson told the broadcaster.

Three of the victims were found together on the ground floor of a house in Simbach am Inn, police reported late on Wednesday night.

Divers had to recover them after people in the upper floors told rescuers that their neighbours were still down there.

“Our empathy is with their loved ones,” local administrator Michael Fahmüller said.

Water pumps were sent into the town by early morning on Thursday in a bid to begin cleaning up the mess.

But the flood had swept trees, rocks, cars, rubbish and mud through the devastated town, smashing shop windows and businesses on the main street.

A fourth woman was recovered dead from a stream near Julbach, a few kilometres away, police reported.

“The floods came so quickly that people had to escape to the roofs of their houses,” a spokesman for the Lower Bavarian regional police said, adding that many streets were submerged.

In the town of Triftern, around 50 children and 25 adults bunked down in their school on Wednesday after being cut off by the waters.

Volunteers are still searching for a fifth person reported missing in Zeilarn, and others may be reported in the course of the day.

“It's all a big mess,” said a spokeswoman for the Rottal-Inn district, which covers most of the stricken towns.

Administrators there had already declared a disaster by Wednesday afternoon as high waters blocked traffic and left many people – including a large group of school children – stranded.

Around 9,000 homes were left without power overnight as the floods took their toll on local power lines. Firefighters stand on a destroyed street in Simbach am Inn after a devastating flood. Photo: DPA

First estimates of the devastating results of the flood put the cost of the damage at well over €10 million.

Some whole housing estates have been made uninhabitable by the chaos, with river rescue boats now patrolling the streets and shouting out in case any people remain trapped in their flooded homes.

Dam threatens to burst in NRW

In North Rhine-Westphalia, firefighters in the capital Düsseldorf reported more than 420 callouts by Wednesday night to pump water out of cellars and flooded tunnels.

Around 240 firefighters were involved in fighting the rising waters. No-one was hurt, but traffic around Düsseldorf was blocked due to the flooded tunnels on the A46 Autobahn.

Other tunnels in and around the city were blocked by high water.

Meanwhile, authorities have declared a disaster after sustained heavy rainfall in the Wesel district.

Gauges show that the river Issel has reached 1.5 metres above its usual level, a spokesperson for the local crisis team said. A regional train near Xanten, North Rhine-Westphalia, is unable to proceed after a mudslide blocked tracks towards Duisburg on Wednesday. Photo: DPA

Volunteers are trying to shore up a dam with sandbags which threatens to burst, flooding a nearby business district.

In neighbouring Xanten, the historic town centre has been flooded.

Train tracks are likely to be blocked for several days after a mudslide interrupted traffic towards Duisburg.

In its report on Thursday morning, the German Weather Service (DWD) warned that southern, eastern, and central Germany may continue to suffer heavy rain over the coming 24 hours.

“There remains a certain risk of severe weather with heavy rain [in the south] because the storms are not moving very far,” the report read.

But the warning levels are lower and the at-risk areas much smaller than they were early on Wednesday evening, according to the DWD weather map. Over the border in Austria, heavy rain lashed the Salzburg region, flooding several roads and forcing several schools to announce closures for Thursday.

Heavy rain and floods have also caused chaos in France, with at least one woman killed in some of the worst flooding in more than 100 years in the centre of the country.