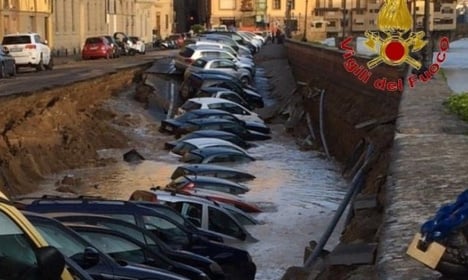 The incident occurred at around 6:15am, right in the centre of the Tuscan city, between Ponte Vecchio and Ponte Le Grazie.

Emergency services arrived to secure the area and the city's mayor, Dario Nardella, described it as “very serious”, but there were no injuries.

Initial investigations by the fire service suggest that the sinkhole was caused by a large aqueduct pipe breaking, and the water eroding part of the road. The area remained cordoned off to traffic on Wednesday while emergency services worked to prevent further damage to the road.

“This is almost certainly a phenomenon related to water infrastructure,” Alessandra Biserna, of the National Geology Advisory, said in a statement.

“The measures that are being taken right now are necessary,” Biserna, who is at the scene, added. “Also because of the potential impact on the surrounding infrastructure.”

“The question I’ve asked myself is whether it was entirely preventable – maybe there was a warning in recent days,” she continued.

“Information from the water network in Italy clearly indicates water losses costing at least €200 million a year. Every year we record a loss of over 35 percent.”

This is not the first time a sinkhole has caused chaos in Italy; they are particularly common in the south of the country due to a combination of weather conditions and structural issues. Sinkholes have opened up in Naples on more than one occasion, prompting hundreds to be evacuated from their homes, and they have swallowed cars in Catania and engulfed trucks in central Rome.