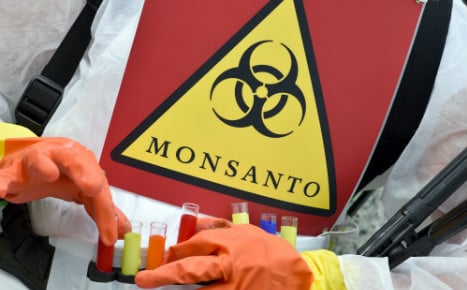 An anti-Monsanto activist at a protest in Brandenburg in 2014. Photo: DPA

German chemicals and pharmaceuticals giant Bayer, a household name thanks to its painkiller Aspirin, said this week that it is offering $122 per share in cash for Monsanto, or €55 billion in all.

It would be the biggest takeover by a German group of a foreign company and would create a new world leader in seeds, pesticides and genetically modified (GM) crops.

But the US agrochemical giant, Monsanto, already under fire in Europe over the possible health risks connected to its pesticide glyphosate, has long been a red rag to environment groups worldwide because of its work in altering the genetic make-up of crops to make them more resistant to disease.

“Monsanto couldn't be more unpopular in Germany,” said Anne Isakowitsch, a Berlin-based activist for the environmentalist campaign group, Sum of Us, who has launched a petition against the tie-up.

A combination of the two groups would be “disastrous and diabolical,” she told AFP.

“The biggest fear is that Bayer is seeking to buy Monsanto to inundate the European market with GM crops.”

Isakowitsch is not alone in expressing such concerns.

A study published by the Environment Ministry in April estimated that 76 percent of Germans feel that the ban on GM crops is justified.

Individual members of the Social Democrat, or SPD party, junior partner in the ruling coalition under Chancellor Angela Merkel, are critical of the tie-up.

“I am very, very critical about the deal. Monsanto has an extremely bad reputation in Germany in the area of genetics,” said Elvira Drobinski-Weiss, who is in charge of GM issues within the SPD.

Opposition is so deeply ingrained that BASF, Germany's other agrochemicals giant, moved its GM research activities to the US in 2012 and halted development of GM seeds for the European market.

The prospect of a tie-up between Bayer and Monsanto is therefore likely to rekindle the whole GM debate in Germany, observers said.

“I hope it will,” said Drobinski-Weiss, who wants to harness the debate to campaign for a nationwide ban on GM crops in Germany. Currently, it is up to each regional state to ban them.

The new giant “would have enormous lobbying power on both sides of the Atlantic,” said Marco Contiero, policy advisor for agriculture and genetic engineering at Greenpeace.

Bayer is already under fire from environmental activists for manufacturing pesticides that are blamed for the decline in the world's bee populations.

The European Union has placed a moratorium on sales of those chemicals, which are classed as neonicotinoids, since the end of 2013.

But Bayer is contesting the ban.

Its chief executive Werner Baumann conceded that the company would have to “decisively address the point of reputation and challenges of Monsanto in Europe”, insisting that “our brand stands for responsibility, transparency and openness”.

Critics also argue that a marriage between Bayer and Monsanto would give the two dangerous dominance in the world's agriculture sector, which is already undergoing a wave of consolidation.

US groups Dow Chemical and Dupont are planning to tie the knot, China's ChemChina is taking over Swiss player Syngenta.

And a combined Bayer and Monsanto would be the world leader in seeds and pesticides with market shares of 29 percent and 24 percent respectively, according to Greenpeace.

The new entity “will decide what consumers can have on their table,” because it would be in a position to dictate to farmers “what to plant and how to grow it,” said Greenpeace's Contiero.

Bayer “is going in the opposite direction to current global discussion,” she told AFP.

The EU last week failed to agree on the re-approval of the glyphosate weedkiller in Europe amid fresh fears the product could cause cancer.

Monsanto markets glyphosate under the brand name Roundup. And Künast suggested that if the product becomes a Bayer brand, German politicians could even be persuaded to drop their opposition to it.