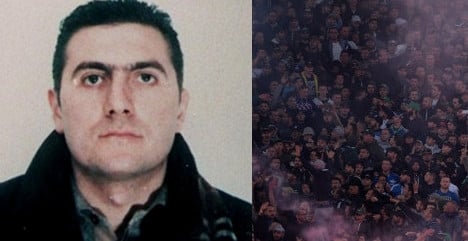 Daniele De Santis has been found guilty of killing a Napoli fan ahead of the Italian Cup final in 2014. Photos: Rome police/AFP

Daniele De Santis, a Roma 'ultra' and right-wing militant, was on Tuesday found guilty of shooting 31-year-old Ciro Esposito during clashes with Napoli fans who were in Rome for the final against Fiorentina in May 2014.

Rome prosecutors had sought a life sentence for De Santis,  who admitted to pulling the trigger but said he did so in self defence.

Ultras are gangs of fans who pride themselves on their dedication to their clubs and are frequently associated with the violence that continues to blight Italian football.

The incidents before the 2014 Cup final made headlines around the world.

At least five police were injured trying to break up a string of clashes between Roma and Napoli ultras in the hours before the match.

After a 45-minute delay to kick-off, a decision was made to go ahead with the game. Napoli beat Fiorentina 3-1 in a final played largely in silence.