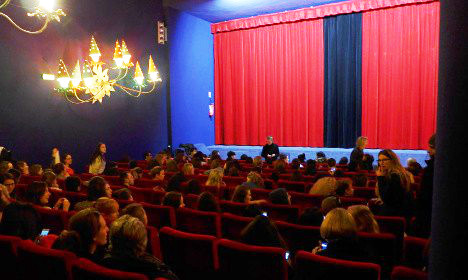 Whether you’re a fan of classic Cocteau from the mid-twentieth century, gritty La Haine set in the banlieues, or the colourful, dreamlike Paris depicted in Amelie, there are few better ways to get to know France and its culture than through its films.

But when Australian-born Matt Bryan moved to Paris, he discovered that not a single cinema in the capital showed French films with English subtitles, leaving him unable to watch them with his Parisian co-founder Manon Kerjean.

“It became clear that Paris's expats, international students and tourists were basically excluded from enjoying France's amazing cinema culture,” he tells The Local.

“The film that really crystallized the idea for us was the French-Canadian film Mommy – there was so much excitement and hype around it but it was still impossible to find it with English subtitles.” So six months ago, the pair set up Lost in Frenchlation – a company offering screenings of recent French releases with English subtitles,.

The events, always preceded with drinks (including a cocktail inspired by the film), give Paris's large international community the chance to learn more about France as well as meet others in the same situation.

With a focus on current box office hits, particularly “those which demonstrate French culture, style and humour”, Bryan says they hope to give non-French speakers the opportunity to see the movies which “they are hearing colleagues and friends talking about – as well as seeing them advertised all over Paris.”

With five screenings already complete, the events are starting to sell out and are attracting a diverse range of clients.

The next event will be a screening of the comedy Five, which draws inspiration from cult American hit The Hangover, on Friday, May 20th at Studio 28 in Montmartre.

PARTNER CONTENT
Six reasons why international health insurance could give you peace of mind – now and in the future
Url copied to clipboard!