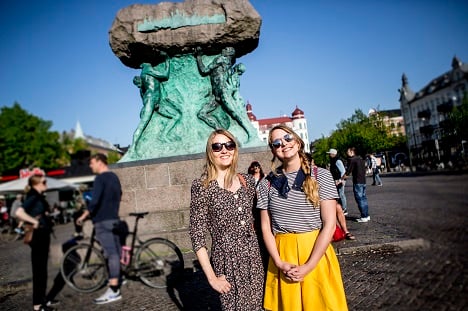 The majority of Malmö University students have to fend for themselves when it comes to finding a home, and with just 2000 student apartments in and around the city, and a whole bunch more students clambering after them, getting the low-down on what’s what is no bad thing.

Mette Skaarup and Silja Tuovinen met on the Peace and Conflict Studies programme, and we spoke to them about how they battled through the apartment-finding and settling in process. Planning to study here? Check out their top tips!

1. It’s never too early to start the hunt

The university’s official guidance is to start looking for a place before you’re even accepted, but as 20-year-old Silja from Finland found, an early start can still lead to some frustrations.

“I knew a few friends in Malmö, so I messaged them and asked for their advice,” Silja says.

“They told me to register on the housing queue website Boplats Syd, and gave me a few emails to try. I also got added to a Facebook group where people advertise rooms – there are a lot of nice offers there but they go very quickly.”

“I basically registered at a bunch of places and then waited. I never heard back from any of the people I contacted, but a friend told me he was going on exchange studies and had an apartment in student housing, so I rented his place.”

Mette, a 24-year-old from Denmark, left the housing issue to handle a bit later – but after a few weeks on a mate’s sofa, she also managed to find a place.

“When I found out I was accepted into the programme I thought I wanted to stay in Copenhagen,” she says. “I had been travelling the whole summer and I got home a week before university started. I was just going to stay at a friend’s in Copenhage, but the first day here I realised that I didn’t want to commute – I wanted to live here.”

Mette applied for student housing and received an offer after a few weeks.

Silja adds: “I think it would make sense to register at different places before you got accepted into a programme, but you seem more trustworthy to the people you are messaging after you’ve been accepted.”

“I think the people renting out places on the Facebook groups give very short notice a lot of the time, like ‘I’m renting out my apartment in two weeks’,” she notes. “That’s a little frustrating. I hear Blocket is worth checking out too.” Beggars can’t be choosers, the old saying goes. And it holds true.

“There is always someone somewhere with a spare room, but you can’t be too picky,” Silja says.

“Don’t come here and expect to find the perfect apartment in the perfect area which is furnished and it is beautiful and cheap. You might end up living with an old grandmother for three months, but you’ll always find a place in Malmö.”

In the meantime, there are pretty unique solutions in Malmö. While Mette was asking around for a place to crash she was offered a fellow student’s camper van to sleep in, and Silja was offered a boat moored up in a sea dock.

“People want to be close to the centre of the city,” says Silja, “but Malmö is not too big, so don’t worry if you’re not right in the middle. Wherever you are, you’ll not be that far away from the centre or the university, and it is nice to cycle around anyway.”

3. Keep your wits about you!

Malmö University does its utmost to prevent scammers on its rental ad site Hemma, but like any other city in the world, there are a few unscrupulous dodgy types out to take advantage of the housing shortage.

You can read the guidelines here. “Someone tried to fool me,“ says Silja.

“I saw an advert in Hemma; it sounded really cool and it was in a good spot, it was not too expensive, which made me a bit suspicious.”

Silja sent a message and quickly received a response. The woman said she was a mother in a family of four, and sent a picture of themselves. But then things got a little strange.

“All of a sudden she said she was living abroad, and for me to rent the apartment I would have to help with her costs. And that was when I realised.”

Silja adds that many scam emails follow the same format, and they’re easy to spot once you know what to look for.

“These adverts are always the same, they give out a lot of detail in the first email about how wonderful their family life is and how they are living abroad.”

Mette notes that if it seems too good to be true, it probably is.

“Just keep an eye out,” she suggests. “I wouldn’t pay anything until I’ve signed something, and have taken all the steps I could to know that everything is genuine not under the table.”

Because Silja rented a flat from a friend, it came ready-furnished, but it is rare to find furnished property. Still, Sweden is the home of Ikea, right? One of the cheapest and most space-conscious furniture stores there is.

But these two have even more cost-effective advice to transform a bare flat into a home.

“I decided I did not want to buy furniture,” says Mette proudly. “I had a bed, but then I just found stuff. There is a room for rubbish and recycling in the building, and people leave stuff like furniture there.”

The first thing she found was a small pallet which she used as a table. Then she discovered two chairs which just needed to be washed, and then a coffee table and two armchairs.

“Then a friend told me there was a desk in another of the recycling rooms, so I got that, too.”

Despite her furnished pad, Silja also got in on the freebie action.

“I found dishes there, so now I have my own plate collection and glass collection. I found a mirror and a candle holder too.”

For those willing to splash out a little cash, there is also a wealth of second-hand stores.

“There are some really good charity shops here,” Silja says. “You can get everything you can possibly imagine from them. You don’t need much to keep you happy. It’s not such a big deal to move into an empty apartment – people really appreciate the recycling culture here.”

“When you study you meet people from your class,” says Mette.

“If you participate in university activities, or become part of an association, you’ll meet people easily. I found that because there are so many international students everyone is in the same boat, maybe everyone feels a bit alone at the beginning but we all moved here at the same time, so we all figure out what to do together and where to go together.”

Silja adds that people in Malmö are very friendly, and typically do whatever they can to help each other.

“There is a thing called Sofa Project that will do whatever they can to find somewhere for you to stay, and that is a good way to make connections and find a temporary place to sleep when you first arrive,” she explains. “I think a lot of people do it for free just to help others – I know three people who have done that. It can be easier to search for an apartment when you’re here because you actually meet people who can help.”

That’s how these two did it. Any final comments on how to find home in Malmö?

“Malmö is a really great city to live in,” they agree. “There is always something going on, and it’s by the sea.”

Strictly speaking, that’s not about housing, but either way, a ringing endorsement for anyone thinking of studying here. Everyone knows fresh sea air is good for the brain, right?

You can find out more about the Peace and Conflict bachelor’s programme here.