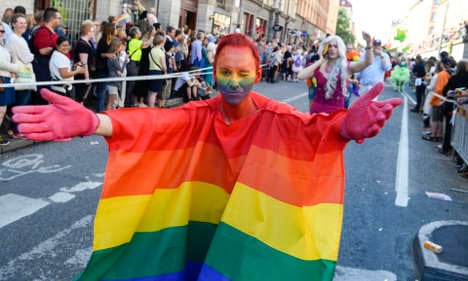 Stockholm's Pride Festival in 2015. Photo: Vilhelm Stokstad/TT
Sweden had previously been rated below only Malta, Belgium and the United Kingdom in the so-called Rainbow Index, but this year countries like Denmark, France, Portugal and Finland bounded ahead, causing it to lose its position.
Howver ILGA-Europe told The Local this was more a result of other nations improving their policies than life in Sweden getting worse for gay, lesbian, bisexual, or transgender people.
“A lot of countries have stagnated at a relatively high level, but are now starting to move slightly down the rankings because other countries are moving ahead,” said advocacy director for ILGA-Europe Katrin Hugendubel.
One area where Sweden lost points was not having a formal plan to combat homophobia and transphobia, which countries like France and Belgium have created.
The report highlighted a number of incidents of high-profile Swedes who uttered homophobic or transphobic statements over the past year, such as when former pastor and Christian Democrat parliamentary candidate Tommy Dahlman said that gay people would “go to hell”.
Another area where not just Sweden, but the rest of Europe still needs to focus is on rights for intersex individuals, including further anti-discrimination protections and establishing healthcare protocol for them, according to the report.
One of the major reasons that Malta came out on top in the latest analysis was because of its ground-breaking legislation for protections for intersex people – those born with sex characteristics that do not fit into typical notions of female and male bodies.
Last April, the country became the first to outlaw non-consensual medical interventions for intersex people.
“This is one issue that has been neglected for a long time,” said Hugendubel.
“One of the messages from this report is that countries can learn a lot from each other.”
Sweden was, however, praised for its work to promote transgender rights in the past year, including an plans to overhaul gender recognition laws to lower the age limit and separate the legal and medical procedures.
“Improving the lives of trans people was at the forefront of several initiatives in 2015,” the report stated.
The report also highlighted how Sweden has implemented new health care protocols to make publicly-funded surgeries and hormone therapies available to transgender people equally.
Rainbow Europe additionally noted Sweden’s progress in creating more information for and about the LGBT community, like Stockholm launching an awareness programme about sexual orientation and identity in schools. RFSL Ungdom, the Swedish youth federation for LGBTQ rights, also started a website where youth can report discrimination they face in schools.
While Scandinavian countries tend to have more rights than other European countries, especially those in the East, Hugendubel pointed out that there is still work to be done across the continent.
“You can’t move ahead on one thing and think the job is done,” she said.
“In the EU there’s a feeling that lack of equality is only happening outside of Europe, so this is a reminder that we’re not all on the right side of history quite yet.”