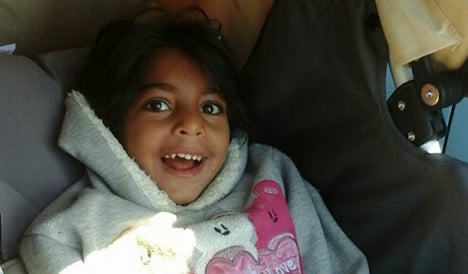 Osman is currently waiting at a camp in Greece. Photo: Bomberos en Acción.

“I gave instructions as soon as I found out to the Embassy of Spain in Athens to bring Osman here as soon as possible,” the minister said in a statement posted on Twitter.

“We are all devoted to this.”

Osman suffers from the movement disorder cerebral palsy and is currently living in the crowded camps of Idomeni, Greece at the closed Macedonian border where thousands of refugees are stranded, hoping to proceed on what was a main migration path through Europe.

García-Margallo said that the little boy and his family would be taken to a hospital in Valencia where Osman can receive proper treatment.

Osman's story started gaining attention across the country when the NGO Firefighters in Action (Bomberos en Acción) started an online petition, raising more than 150,000 signatures in support of bringing him to Spain.

“The number of people who showed their interest in Osman is good news because it shows that our country is in solidarity, and believes this is worthwhile,” García-Margallo said.

Osman along with his parents and two siblings, ages nine and eight, fled Afghanistan in March and “after a harrowing journey on land and sea,” arrived at the Greek camp, according to Firefighters in Action.

Osman suffers from recurring seizures, spasticity (tightness of the muscles), respiratory problems and malnutrition, according to the firefighter group.

“In one month, he lost four kilos (now weighing eight kilos at 90cm tall,” the group wrote in the petition, adding that he is only eating small amounts of cereal and milk so as not to risk choking.

To bring the family to Spain, the Foreign Ministry must still clarify whether the family first applied for asylum in Greece, and then how it would be possible to bring them to Spain, according to Europa Press.

But once the necessary paperwork has been sorted, Osman could even travel to Spain within the next week, though nothing is yet certain, Europa Press reported.

“This is one of the things that make it worthwhile being Foreign Minister,” García-Margallo told Spanish media. “To be able to alleviate the pain of refugees – even by a little bit – is huge, especially for a child at this age.”

But as much as Osman's story has melted hearts across the country, Spain has also come under harsh criticism from the EU and UN for not taking in enough refugees. Spain agreed last September to take in some 15,000 refugees from overwhelmed Greece and Italy, but since then has only taken in 18.

Critics have blamed conservative leaders including acting Prime Minister Mariano Rajoy for dragging their feet on the matter.