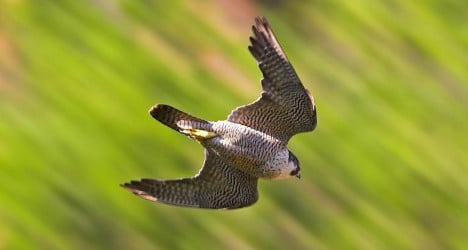 Peregrine falcons are protected in Switzerland. Photo: Mathias Schäf
The 42-year-old accused man has admitted to police that he killed the peregrine falcon – a protected species in Switzerland – in August 2015 by smearing a banned pesticide on the back of a pigeon and sending it out as prey for the falcon, reported Zurich newspaper Neue Zürcher Zeitung.
The man, one of a group of pigeon fanciers in the Zurich area, obtained the highly toxic pesticide in Serbia and illegally imported it into Switzerland, said the paper.
He then chose one of his 200 pigeons for a suicide mission. After smearing the chemical on the bird’s body he released it into the air and prevented it from being able to return home.
It was subsequently attacked and eaten by the falcon, which then died an “agonizing” death, according to the indictment quoted by NZZ.
Swiss bird protection association Bird Life Schweiz (SVS) confirmed the story to The Local.
The man’s admission is good news for the organization, since it has been trying to uncover the culprits behind a spate of such falcon-killings in the Zurich area over the past several years.
“We think it’s really good that finally people will see that it’s not a joke and that there really are people who want to poison species that are on the red list and are protected,” SVS spokeswoman Marie Gallot told The Local.
SVS was first warned about such activity by its Serbian equivalent, which had heard that users of a Serbian blog were bragging about falcon-poisoning in Switzerland.
“They said 'be careful, there’s something going on in your country'. So that’s how we became aware of it in the beginning,” said Gallot.
SVS subsequently erected webcams in various places in Zurich and filmed an incident where a falcon was killed by eating a poisoned pigeon.
But it remained incredibly difficult to find out who was behind the act, and such activity continued, with Zurich police investigating a further incident last year.
Christa Glauser, deputy CEO of the SVS, told The Local: “Poisoning peregrines is a problem for many years. In Basel and Zurich there are many killings.
“Especially with peregrines, which reproduce very slowly, it is a huge problem. In some regions the population has been reduced by 50 percent.”
According to research by NZZ, the accused man is part of a group of pigeon fanciers in Zurich who organize unofficial contests to see how long their birds can stay airborne. The winner gets around 1,000 francs, said the paper, but those birds who fail to return – perhaps because they have fallen prey to a falcon – are disqualified from the competition.
The prosecutor in the man's forthcoming trial  – the date for which is not yet set  – is demanding a custodial sentence of 11 months and a fine of 4,000 francs citing multiple counts of animal cruelty and violation of laws on the environment, chemicals and the protection of wild animals, said the paper.
“We hope it will scare people off doing the same,” Glauser told The Local, adding that she felt the proposed sentence wasn't harsh enough.
“A big problem is that the birds die a cruel and torturous death by poison. If you ask me personally, this degree of penalty is not fair.”
Watch Bird Life's video here (warning: distressing content)