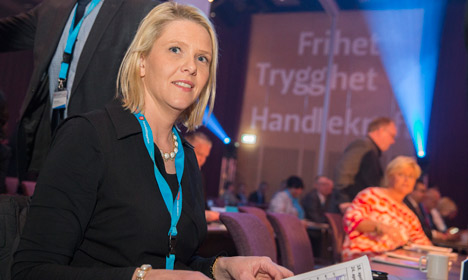 Integration Minister Sylvi Listhaug. Photo: Berit Roald / NTB scanpix
Integration Minister Sylvi Listhaug told Aftenposten that ministry officials would review the regulations for residence permits issued to imams, religious leaders and preachers.
The move comes after Aftenposten reported on Monday that the Salafist organization Islam Net invited several highly controversial preachers to its annual conference last month.
“It is unacceptable that religious organizations in Norway invite people to Norway who undermine Norwegian values,” Listhaug said.
The minister said that while she believes in the right to express one’s opinions, she wants to thwart the emergence of radical religious groups in Norway that advocate what she called antisocial viewpoints.
Sindre Bangstad from the Institute for Church, Religion, and Worldview Research (KIFO) told Aftensposten that there is no doubt that some of the people connected to Islam Net have left Norway to become foreign fighters in Syria.
Norway’s plans to take on ‘hate preachers’ are being mirrored in Denmark, where Danish PM Lars Løkke Rasmussen said last month that his government is preparing legislation aimed at imams who “undermine society”.
The Danish proposals include establishing a list of people who would be barred from entering the country, similar to a blacklist used in Britain, potentially outlawing speech that “undermines Danish legislation”, banning certain people from coming to a place of worship and stripping “hate preachers” of the right to officiate marriages.
See also: Denmark preps action plan for 'hate preachers'