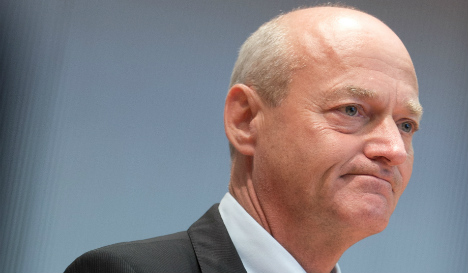 The departure had initially been reported by German media including the Süddeutsche Zeitung before the government confirmed Schindler's replacement.

And it seems that the spy chief needed to be pushed out of the door. Schindler at first refused to resign and had to be forced to leave by his superiors at the Chancellery, Berlin's Tagesspiegel reported citing government sources.

But questions remain over whether the BND boss is being replaced because of embarrassing stories about the agency in the press – or whether the government prefers an intelligence chief who is politically closer to them.

The outgoing BND chief had also caused a minor diplomatic stir in December when he warned that Saudi Arabia was destabilising the Arab world with an “impulsive interventionist policy”.

Germany's Foreign Ministry was forced to issue a statement that “the BND does not speak for German foreign policy” in a bid to placate the Saudis.

NSA links in the spotlight

BND activities have been under the spotlight since details of its extensive co-operation with the US National Security Agency (NSA) became public in 2015.

A parliamentary inquiry launched after NSA whistleblower Edward Snowden began leaking information about Western surveillance programmes has found that the BND used mass surveillance software provided by the US spies.

That software allowed the BND to spy on targets including politicians and officials in friendly nations such as France, as well as German businesses.

The BND passed on information about such targets to the NSA under intelligence sharing agreements.

Angry MPs alleged that Merkel's Chancellery – which is responsible for oversight of the intelligence agencies – had failed to keep the BND under control.

Schindler defended himself by saying that his agency was “dependent” on the NSA and couldn't refuse their demands for information – while also claiming that bad management at the agency meant he had been unaware of the domestic spying. A battle erupted in 2015 over access to the list of so-called 'selectors' – targeting information such as phone numbers and email addresses used to identify individuals – given to the BND by the NSA.

In an uneasy compromise, a former constitutional court judge was allowed to view the list of up to 800,000 individuals and report problematic ones to the MPs on the inquiry committee.

But the BND has not let the challenges to its surveillance activities go without a response.

In early 2015, top spies said that looking too closely into the agency's co-operation with foreign allies could endanger intelligence sharing with Britain's GCHQ – potentially putting Germany in danger.

And just weeks ago Schindler and his colleague Hans-Georg Maaßen came out swinging in a joint interview with Stern magazine, which they used to imply NSA whistleblower Edward Snowden had been a pawn of the Russian government.

The pair also took the opportunity to complain about the parliamentary inquiry, which they said was wasting their subordinates' time when they could be focused on fighting terrorism.

“There hadn't been any real, 'personal' consequences since the start of this scandal and the onset of the parliamentary inquiry,” Diani Barreto, a freelance journalist who has closely followed the NSA inquiry since it began, told The Local.

Although three high-level BND agents had been reassigned since last year following the NSA scandal, some of them had even been promoted out of their previous jobs rather than suffering punishment, she said.

New BND boss Kahl's closeness to Schäuble and history as an army reservist active in military intelligence suggest a government determined not to change things too much at the troubled agency, Barreto argued.

“Schäuble personifies the status quo, hard-liner, hawkish BND stance,” she said, against the reform that opposition parties like the Greens and Left Party have been calling for.

The question now is, “is it enough of a gesture to appease the outraged German citizenry – is this pawn sacrifice enough to inspire confidence in the somewhat ravaged image of German parliamentary democracy, in the very notion of oversight [of the intelligence agencies]?” she concluded.

Opposition MPs were quick to issue statements warning that simply replacing the head of the BND would not be enough to clear the air around the agency.

“Will the cleaning-up start now or is this the end of the reform of the secret service laws that had been announced?” asked Green party MP Hans-Christian Ströbele.

“If removing Schindler is supposed to replace the necessary reforms to the BND, this is a huge own goal by the Chancellery,” fellow Green and member of the NSA parliamentary inquiry Konstantin von Notz tweeted.

“It's not enough to change the BND President. The Chancellery must finally take up responsibility for a service out of control,” tweeted Left party MP Martina Renner.