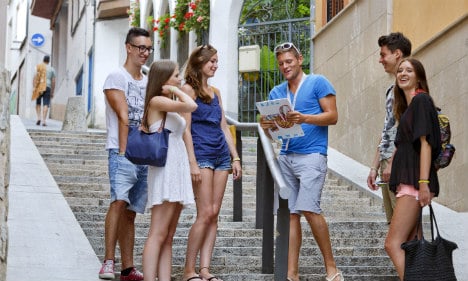 "This map says there's another H&M over there!" Photo: obs/ruf Reisen GmbH

“For most 14- to 17-year-olds today, it's true that they want to be like everyone else,” the authors of the Sinus Study, a report by an umbrella group of researchers, wrote in a press release on Tuesday.

The picture is a far cry from the traditional image of German youth, which has in past decades tended to form into distinct subcultures – from hippies to punks – that have gone on to shape the social and political landscape.

But in in-depth interviews with 72 teenagers, researchers found that external influences like economic struggles, terrorist attacks and an increasingly uncertain, globalized world were moulding the young into a homogenous mass. “If we work hard at school, we might be able to work for a couple of years before the robots take all our jobs!”. Photo: DPA

“This is a non-rebellious generation whose highest aim is to enter society,” researcher Klaus Hurrelmann said, warning that the mainstream trend might lead to “over-conformity out of fear”.

That's certainly true in the areas where teens have most traditionally sought to distinguish themselves – for instance, through clothing, music, or favourite films.

“This is the first generation where parents and children listen to the same music and mothers ask their daughters about fashion blogs,” study author Marc Calmbach said.

“But throughout all the groups there is a feeling of common ground,” Hurrelmann said.

The last time researchers noticed such an effect among young people was in the immediate aftermath of the Second World War, until the rebellious generation of 1968 began challenging the conservative social order of their parents.

Study author Calmbach said he had been surprised by just how much young people were thinking about the basic values that bind society together.

They put a high value on freedom and the rule of law, he said, and were thinking a lot about protecting the environment and conscious consumption – although that didn't always influence their shopping choices.

Even in interviews conducted at the height of Germany's 2015 refugee crisis, teens from all social backgrounds agreed that violence should be avoided and that xenophobia and religious intolerance were wrong.

A significant majority also said that taking in refugees was the right thing for Germany to do.

Unlike earlier cohorts of teenagers, who spent years locked in battle with their parents over time spent online or playing video games, today's adolescents benefit from an adult world permeated by technology.

Parents themselves are now often constantly online and embarrassing their offspring with affectionate comments on Facebook photos.

But things have now reached the point where teens themselves feel like they need a break from a world lived at break-neck electronic speed.

Some have turned to cooking or gardening as ways of giving themselves some downtime from their smartphones – although the respite is only ever temporary.

The Sinus study has been carried out every four years since 2008 and aims to understand German teenagers' lives. Researchers spoke to young people from different social backgrounds between July and October 2015.
While it's not a statistically  representative sample, researchers say that the in-depth interviews offer them indispensable insights into how adolescents tick.