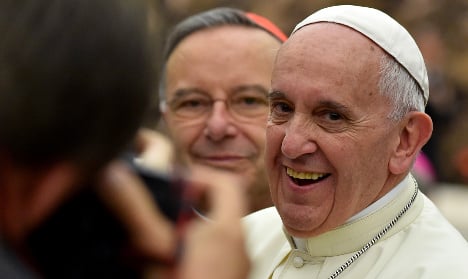 The 16 boys and girls were among tens of thousands of 13 to 16-year-olds visiting the Vatican this weekend as part of Francis's Jubilee year dedicated to the theme of mercy.

Thousands of them confessed to a total of 150 priests on duty at St Peter's before passing through a door of the basilica that is only open for the duration of the Jubilee, which started in December and runs to November.

Under Catholic tradition, passing through a so-called holy door entitles believers to special indulgences during jubilees.

For this one, the first since 2000, Francis has authorised priests to absolve women who have had abortions.

The Holy Year is also a time when the faithful are encouraged to reflect on their faith and renew their relationship with God.

There were no special arrangements for the 79-year-old pope to hear the confessions of the teenagers selected to speak to him.

They all appeared relaxed as they sat on simple chairs face-to-face with the leader of the world's 1.2 billion Catholics.

Francis shooks hands warmly with each of them and spent a total of an hour and a quarter on the square before departing with a cheery “ciao ragazzi” (Bye guys!).

After the religious ceremonies the mostly Italian teenagers were due to be entertained by rock and rap stars at a concert on Saturday evening in Rome's Stadio Olimpico.

Many of them will be back at St Peter's on Sunday for a special mass led by Francis.

Earlier in the day the pontiff was presented with a pistachio and hazelnut cake featuring an image of St George slaying a dragon.

The Pope's real first name, Jorge, is the Spanish equivalent of George and April 23 is St George's day.