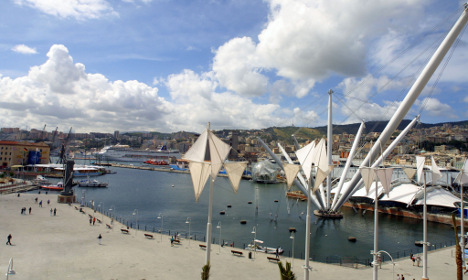 The move came after a river barrier erected to contain the spillage from a pipeline leak at a local refinery on Sunday gave way as a result of heavy overnight rain.

“The situation is complicated. We do not know how much crude could end up in the sea,” local civil protection officer Gianni Crivello told reporters.

“The Port authority has declared a local emergency.”

Genoa mayor Marco Doria said a plan to contain the spill was being implemented and appeared to be working.

“Presumably the oil already in the sea is from the first hours of the incident at the Iplom refinery (on Sunday),” he said.

Local media have reported a series of slicks being spotted offshore to the west of Genoa.

The initial leak sent large quantities of oil into the Polcevera river but authorities claimed to have contained it within hours and have been pumping it out since then.

The Bussala refinery where the leak came from is due to cease production on Monday for economic reasons.

Genoa is located in the middle of the Italian Riviera, close to famous resorts like Portofino and several protected areas of outstanding natural beauty include the Cinque Terre region.