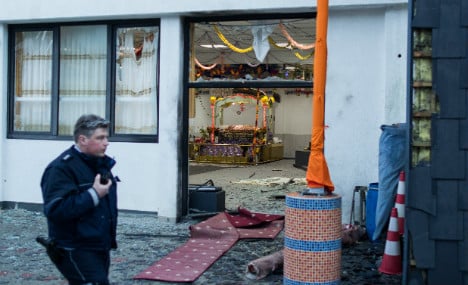 A police officer walks past the destroyed entrance to the Essen Sikh temple on Saturday April 16th. Photo: DPA

Officers received large numbers of tip-offs during their investigation that allowed them to identify the two 16-year-olds believed to behind the attack, the Westdeutsche Allgemeine Zeitung (WAZ) reported.

“The accused have clear links to the terrorist scene,” Essen police chief Frank Richter told journalists at a press conference, saying that both teenagers had made partial confessions.

Richter added that there was no evidence so far of a link to the Isis terrorist group, but said police expect to make further arrests in the coming days.

ARD public television reported that the two youths arrested were well-known to the police for their links to the Salafist scene in the densely populated Rhine-Ruhr region of North Rhine-Westphalia, something Richter refused to confirm at the press conference.

The bomb exploded at a temple belonging to the Sikh Gurdwara Nanaksar congregation on Saturday at around 7 pm, wounding three people – one of them, a Sikh priest, seriously.

Hundreds of worshippers regularly visit the temple at weekends to pray and meet other members of the community, and a wedding with dozens of guests had taken place earlier that same day.

Fortunately, only a few people were in the hall at the time of the explosion. Windowpanes shattered with the force of the blast and the door was ripped from its hinges, while parts of the slate facade were also torn away.

An audio recording from the moment of the crash features a loud explosion and then shouts from the people gathered inside.

Witnesses said that they had seen a masked man throw a round object into the entrance before fleeing, and police found a discarded mask close to the scene shortly afterwards.

It quickly became clear that the explosion was caused by a deliberately placed bomb, but police initially said that they had no evidence of a terrorist connection.

News of the attack caused uproar among Sikhs all over the world as new reports, photos and videos were shared online.

The Indian consul-general based in Frankfurt made a special trip to Essen to meet with city authorities.

Most Sikhs live in northern India, but there is a population of more than 13,000 in Germany, many of them based in Cologne.