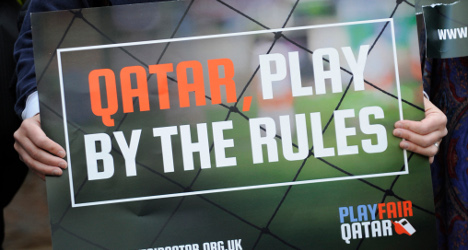 In December Fifa — based in Zurich — asked John Ruggie, a former UN special representative on business and human rights, to assess its human rights efforts as the organization faced mounting criticism over the 2022 World Cup in Qatar.

“Fifa has been beset by allegations about human rights abuses in connection with its events and relationships,” said the report by the Harvard University specialist.

“Prominent among them have been reported deaths among migrant construction workers in Qatar, which was awarded the 2022 Men's World Cup, and the country's kafala system that often leaves migrant workers in situations of bonded labour.

“Other tournaments have raised concerns about forced evictions of poor communities to make way for stadiums and other infrastructure, and clamp-downs on freedom of expression among citizens and journalists.”

Ruggie raised tough questions about Fifa's consideration of human rights when choosing tournament hosts and highlighted a decision to stage the Women's Under-20 World Cup in Papua New Guinea in November-December this year.

“Papua New Guinea is known as one of the world's worst places for sexual violence against women and police are often among the perpetrators,” said the report.

Fifa's decisions have “left individuals and communities vulnerable and Fifa's own reputation exposed,” Ruggie said as he exposed gaps in Fifa's management and policies.

“At this time, Fifa does not yet have adequate systems in place enabling it to know and show that it respects human rights in practice,” he said.

Ruggie said the world body, also facing widespread condemnation over corruption scandals in football, must quickly integrate human rights principles into its practices for the selection of the 2026 World Cup host.

The bidding campaign has been suspended because of the bribery scandals that have beset football. It is due to start this year however.

“Fifa is not responsible for all human rights abuses by organizations it works with, or any country in which its events are staged,” said Ruggie.

“But it is responsible for its own involvement with such risks, whether the connection is through its events, commercial subsidiaries and business partners, members or other parties.”

Ruggie said that Fifa is not doing enough to put human rights in accords with the host countries of World Cup and other events, nor to put pressure on those countries when there are problems.

Without naming any current World Cup host country, Ruggie said: “Where Fifa is unable to reduce severe human rights impacts by using its leverage, it should consider suspending or terminating the relationship.”

If it could not do this it had to clearly explain why, he added.

Ruggie said Fifa should work with “local stakeholders, sponsors, international organizations, and others” to put pressure on governments.

“The option of ending a relationship itself is an important source of leverage and should be clearly communicated to bidders, suppliers, licensees and other relevant entities,” said the report.

“Like any other enterprise, Fifa needs to be able to terminate a relationship if peoples' human rights are abused. This means writing it into its agreements for World Cup tournaments from the start,” Ruggie told AFP.

Infantino said that Fifa wants to be “a leader among international sports organizations.”