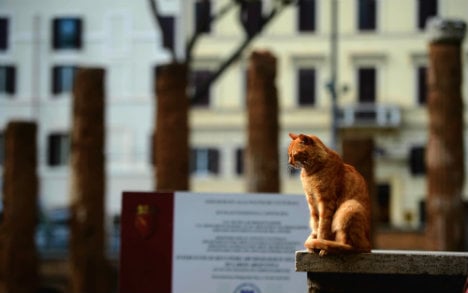 A candidate in Rome's mayoral elections has said he will unleash 500,000 cats against the city's rats if he takes office. Photo: Filippo Monteforte/AFP

The unique approach to pest control was announced on Tuesday in a note published by the mayoral hopeful, Antonio Razzi, who also sits in the Italian Senate for Silvio Berlusconi's Forza Italia Party, Adnkronos reported.

“One of the key points of my plan is to free the city from its rat invasion, but time is running out,” wrote Razzi. “Everyday there are more and more.”

If elected, Razzi would like to import 500,000 cats from Asia and charge them with rat-catching duty.

“I have already made plans to bring over the cats, which will be deployed at strategic points throughout the city,” Razzi continued.

But Razzi is not advocating unleashing huge gangs of feral cats in the city; in fact, he has an innovative and cost-effective solution to housing and feeding the animals.

“They could live with Rome's lovely old cat ladies. We could even offer a subsidy for taking them in,” he added.

The Eternal City has been home to cats since ancient times. Feral felines can often be seen lazing among the ruins of the city's archaeological ruins of Largo Argentina, although they seemingly have little interest in rat patrol.

However, the number of wild cats in the city has fallen dramatically since the late 1980s, when a policy of neutering all the feral cats and dogs in Rome was adopted.

Since then, rat numbers have soared, helped along by the city's refuse collection issues, which leave the rodents with no end of tasty morsels to snack on.

Experts say there are now six million rats in the city, meaning there are more than two rats for each of the city's 2.6 million inhabitants.

The rodents have even been spotted at some of Rome's most iconic tourist sights.

Last year, they invaded the Trevi fountain, while in March a ticket office at the Colosseum was closed when a rat died in the ceiling cavity, causing blood to drip onto the counter below.