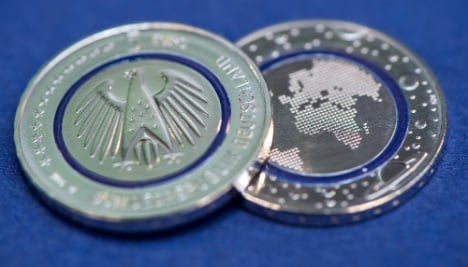 Bavarian Finance Minister Markus Söder presented the coin to the public in in Munich on Monday.

The novelty which has coin collectors all abuzz is that a blue ring of plastic encircles the centre of the coin – and it has been dubbed the three material coin..

The purpose of this blue ring, which can be worked like metal but is actually a special plastic, is not aesthetic. The Bavarian finance ministry claims that it makes the coin much harder to counterfeit.

Two security measures make the coin harder to counterfeit, Söder said. The plastic ring is easy to recognize, meaning that a check for authenticity is possible with the naked eye, while the plastic itself is complex to produce.

Secondly, the plastic behaves like a form on insulation between the two pieces of metal, making it easier for cash machines to tell the difference between a real one and a fake.

Named “Blue Planet Earth”, the coin will enter circulation on Thursday, with a total of 2 million set to be pressed.

By comparison, there were a total of 5.56 billion two-Euro coins and 6.81 billion one-Euro coins in circulation in December 2015, according to Statista.

When the introduction of the coin was announced last summer, Peter Huber, director of the State Mints of Baden-Württemberg, which worked with its Bavarian colleagues on the coin, hailed it as “the innovation of an era.”

The new coins are likely to be highly prized by coin collectors and it would be a surprise to find one cropping up in an everyday transaction.

But, according to Spiegel, the Bavarian finance ministry is debating whether to implement the new design in mainstream types of coin.

Söder said that the counterfeit industry had changed its methods in recent years, with coins now more likely to be falsified than bank notes.

“When this is done in large quantities a huge amount of money can be made,” said Söder.

The Bavarian finance ministry has committed itself to winning contracts for the production of similar coins from abroad.