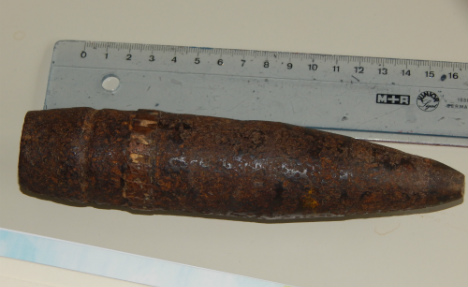 The student at a special needs school near Osnabrück brought the weapon into class after finding it in his father's cellar, the Neue Osnabrücke Zeitung (NOZ) reports.

The boy's teacher then brought the rusty explosive into the teachers' room after class.

“She didn't know what she had in her hand,” head teacher Frithjof Eckstein told NOZ.

But the 62-year-old Eckstein recognized the danger immediately.

“I was totally shocked,” he said.

He called the police who reacted swiftly.

“When we heard that the case concerned a school, we got going right away – lives were in danger,” police explosives expert Clemens Stolte told NOZ.

When officers arrived at the school, the headmaster had already taken the shell into the basement. There, they found a four-centimetre wide, 17-centimetre long Second World War projectile.

“We assessed that it was a dud from the Second World War. The fuse was burnt and the explosive system was exposed – it was highly dangerous even decades later,” Stolte said.

If the explosive would have fallen onto the ground, it actually could have exploded, Stolte told Spiegel Online.

The boy's father found the explosive while visiting a forest in the Netherlands about 30 years ago, and had since kept it in a closet in his cellar.
Stolte and his team removed the shell from the school in a secure container and will safely detonate it in the coming days.
Correction: We previously referred to the weapon as a hand grenade. It was in fact an explosive shell.