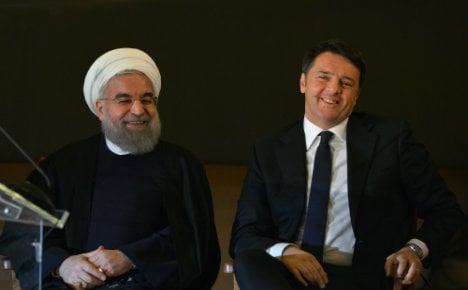 Renzi's office said in a statement Monday that the centre-left premier would be in the Islamic Republic on April 12th and 13th, without giving further details of his itinerary.

Italy has led the way among Western countries in re-establishing economic ties to Iran following the lifting of international sanctions imposed over concerns the country was seeking to develop a nuclear weapons capacity.

An accord to lift the sanctions was agreed last year and came into force in January.

Renzi's trip follows Iranian President Hassan Rouhani's visit to Italy and France at the end of January – a trip which resulted in a string of major trade and investment deals being signed between Tehran and the two European countries.

Contracts worth an estimated €17 billion ($18 billion) were signed in Rome and Rouhani said he hoped that would represent only a start, as he pitched Iran as a safe base for investors looking to get into a regional market of 300 million consumers.

Iran has said it wants European help to modernise and expand its rail, road and air networks as well as seeking investment to boost its manufacturing base, notably in the automobile sector.

Italy was Iran's largest European trade partner before the impact of sanctions caused exchanges between the two countries to collapse.

As he seeks to consolidate Italy's early lead in the race for business deals, Renzi has also unveiled plans for cultural and academic exchanges.

When Rouhani was in Rome in he talked of reconstructing a relationship between “two superpowers of beauty and culture” that dates back to the days of the ancient Roman and Persian empires.

Rouhani's visit however also prompted criticism that Renzi's government was going too far in its efforts to charm Iran's theocratic regime.

It emerged just after Rouhani had left Rome that ancient nude statues in the capital's City Hall had been covered up by wooden boxes to spare the Iranian president any possible embarrassment.

The diplomatic niceties indulged in by the world's biggest wine producer also extended to ensuring that no alcohol was served at any of the official meals during Rouhani's stay – a gesture France was not prepared to make, meaning plans for a state banquet had to be scrapped.

Renzi is not the first European leader to visit Tehran since the sanctions deal: Greek Prime Minister Tsipras went there in February.

He is the first leader of a Group of Seven country to make the trip but is unlikely to be the last this year.

Prime Minister Shinzo Abe announced earlier this month that he plans to become the first Japanese leader to visit Iran since the 1979 revolution that created the Islamic Republic.