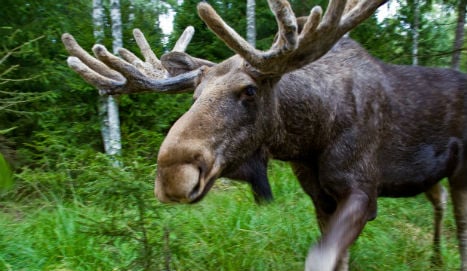 An elk from Småland, the county next door to Halland. Photo: Marie Emitlöf/Image Bank Sweden
A series of women joggers have been ambushed over the last six months by elk bounding out of the undergrowth and charging towards them, with the latest attack taking place as recently as March.
“None of the people who live here think this is especially pleasant,” one of the’ victims, who was attacked while jogging in a disused quarry which is a popular local exercise spot, complained to the Hallands Posten newspaper.
“There are many who have been have been so disturbed by the elk that they no longer feel free to move. I think that the municipality should do something about it.”
Goshia Weber, another of the victims, told the newspaper that she had feared she would be injured or even killed when one of the large telemetacarpal deer surprised her on an evening jog in the Eketånga forest.
“The elk came rushing towards me. I could smell it and just saw the big muzzle,” she said.
She tripped and fell onto her stomach, forcing her to wait as the animal towered over her just metres away
“It was maybe only a minute or two, but it felt like an eternity,” she told the paper. “I had time to think that now it might trample me, and to ask myself ‘how much pain would that bring? Will I even survive?”
Roland Larsson, who is responsible for parks in the municipality, recommended that anyone who felt threatened by an elk should call the police.
“They can be on the spot much faster than we can,” he said. “But we are also out and about checking on the situation.”
Url copied to clipboard!