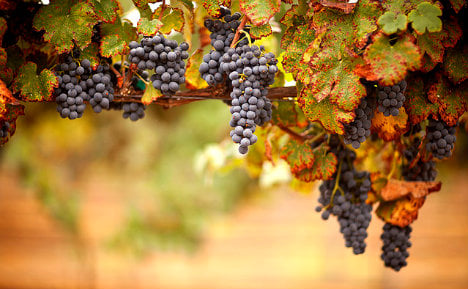 Italy’s northern vineyards have been particularly hard hit due to their proximity to the Swiss and Austrian borders, crossed by a record number of campervanning Germans last summer.

Among them were the Trubenfressers, a retired couple from Hamburg who were caught eating grapes stark naked at a vineyard in Langue, a hilly area in Piedmont that is famous for its wine.

The area became even more popular in 2014 after it was inscribed on the Unesco World Heritage list, prompting a surge in visitors, especially Germans.

“Last year a record number of German tourists visited the area to take advantage of our flourishing vini-tourism trade,” Tomasso Vite, a spokesperson for the Langhe tourist board, told The Local.

“But as we all know, Germans also love to have a picnic, and nothing is more idyllic than laying your blanket down in a vineyard.”

The region is expecting even more German wine tourists this year but many winemakers are up in arms, blaming them for last year's poor harvest.

Not only does Italy, and the world (Italy took over from France as the world's biggest wine producer last year), risk a wine shortage, but winemakers' livelihoods are also at risk.

“Across the region, yields for 2015 were down 10 percent on the previous year,” Valentina Sughero, from the Lange winemakers' co-operative, Cogli, said.

“We can't say for certain that wine tourism is behind it, but we have received hundreds of complaints from winegrowers who have found German tourists in their fields eating grapes.”

Michele Rosso, whose family has been producing the famous Barolo red wine since the 18th century, told The Local he was convinced that the increase in wine tourists was behind the poor harvest.

“People are quick to blame climate change for poor harvests. But last year I threw twelve groups of German wine tourists off my land for eating the grapes,” Rosso explained.

“Some of them weren't even with an official tour, but had snuck through a hole in the fence. As far as I'm concerned that's theft!”

Rosso's complaints were echoed by Marta Bianchi, whose 10 hectares of green Areneis grapes go towards producing some of the region’s most iconic DOCG white wine.

In fact, it was Bianchi who found the naked Trubenfressers having a picnic between two rows of beautifully hung grapes.

She said wine-tourists were becoming ever more “brazen”.

“They were wearing nothing but sandals and socks and had stripped about four metres of the vine,” she added.

“We're now all bracing ourselves for this summer's inevitable influx. I've been to several Cogli meetings and we are trying to develop strategies, such as scarecrows, to try and counteract the rise of grape-eaters.”

The Local managed to track the Trubenfressers down at their home in Hamburg. The wine-lovers told us they’re returning to Italy this year, and insisted they will make the most of their holiday – irrespective of the winemakers’ complaints.

“We can't wait to roll up in our VW camper and sample the grapes we've been reading so much about.”

“As far as I'm concerned,” added husband Horst. “If we've paid for a wine tour, we should be allowed to eat as many grapes as we like – with or without our clothes on.”

In vino veritas? Not always. This article is entirely fictitious and was written to observe the journalistic tradition of publishing nonsense on April Fools' Day.