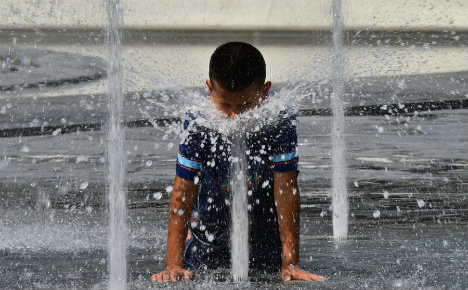 Much of Italy is in for abnormaly hot weather this week. Photo: Giuseppe Cacace/AFP

The clocks may have only just gone forward, but the high pressure the anticyclone brings will see fine, summery weather for all Italian regions south of Tuscany and Emilia-Romagna, 3Bmeteo reported.

Temperatures are expected to rise throughout the week and could reach as high as 25 degrees Celsius in Rome and Florence on Thursday, 26C in Naples and 27C in Foggia on Puglia's Adriatic coast.

On the islands of Sicily and Sardinia, highs of 28C could be reached.

But make the most of it while you can as meteorologists are predicting the anomalous hot weather won't last.

On Friday the period of stable high pressure is expected to end and cool, rainy weather will sweep across Italy from the northeast.

But while south and central Italy swelters this week, it's business as usual for Italy's northern provinces.

Cloudy weather, isolated showers and temperatures in the mid-teens are predicted for the northern regions of Veneto and Lombardy while northeasterly Piedmont is in for stormy weather on Thursday.