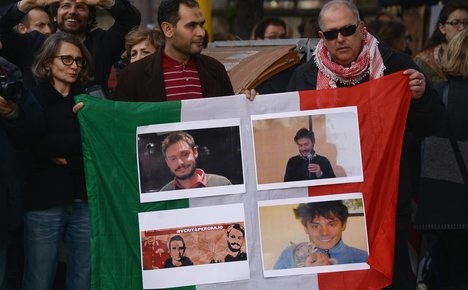 People hold an Italian flag with photos of Giulio Regeni, who was found dead bearing signs of torture after disappearing in Cairo in January. Photo: Filippo Monteforte/AFP

The interior ministry said in a statement that it has shared its findings with Italy, which was helping investigate the abduction and murder of the Cambridge University graduate whose mutilated body was found in Cairo in January.

The manner of Regeni's abduction and killing provoked accusations in Italy of Egyptian police involvement, something Cairo had strongly denied.

Regeni, 28, had been researching labour movements in Egypt, a sensitive topic, and had written articles critical of the government under a pen name.

The incident threatened relations between Egypt and Italy, a strong supporter of President Abdel Fattah al-Sisi whose security services have been accused of abusing dissidents.

The ministry had announced earlier on Thursday that police had killed four members of a criminal gang that had kidnapped and robbed foreigners in Cairo in a shootout, without mentioning Regeni.

A later statement said they found the men, who were posing as police, inside a van and exchanged gunfire with them, killing them all.

“When they saw the police they fired at them. The police returned fire, resulting in their deaths,” the interior ministry said.

Police then tracked down Regeni's belongings at the home of one of the gang members' sister.

“Italian security has been has been notified about the results,” the statement said.

After Regeni's body was found, activists in Egypt and the Italian press initially pointed a finger at the Egyptian security services, which deny allegations by rights groups that they abduct and abuse dissidents.

Regeni had gone missing on the evening of January 25th, the anniversary of the 2011 uprising that overthrew veteran strongman Hosni Mubarak.

Police were out in force that day to prevent protests, and Regeni was last heard from as he walked to a metro station to meet a friend.

The interior ministry had said they believed criminals were behind Regeni's abduction and his brutal killing.

His body was found a week later at the side of a road on Cairo's outskirts, bearing the signs of brutal torture.

In an interview with an Italian newspaper this month, Sisi promised to “do everything” to find Regeni's killers.

“I promise you that we will do everything to shed light (on the case) and we will get to the truth,” he told La Repubblica newspaper.

The statement on Thursday said an unidentified corpse with a gunshot wound was found in the gang's van, along with an assault rifle, an electric prod and fake police identification.

The gang had been responsible for at least nine robberies, including one involving another Italian, according to the ministry.

Their investigation led them to the apartment of one of the slain suspects' sister, where they found a leather bag that contained Regeni's passport wallet, the statement added.

The suspect's wife was also arrested at the apartment and said the bag belonged to her husband.

Award-winning barista and trainer Francesco Sanapo, owner of the Ditta Artiginale cafe in Florence, was reportedly hit with the steep fine after a patron reported him to the local police.

The customer filed a complaint because they were upset at unexpectedly having to fork out €2 for a decaffeinated espresso, reported local news site Firenze Today.

Single-shot espressos typically cost €1 or less in Italy. Ditta Artigianale said its coffee comes from a small plantation in Mexico and that decaffeinated coffee requires complex extraction techniques that are expensive, hence the two-euro charge.

The fine however wasn’t due to the espresso’s high price, but because of a rule that requires cafés in Italy to display their prices behind the counter or in a menu.

Because Ditta Artiginale only publishes some of its prices in physical form, listing others in only an online menu accessed via a QR code, police reportedly said the owner failed to comply with Italian law.

Sanapo asked his followers for help in fighting the fine, calling the law “outdated” in a video uploaded to Facebook on Saturday,

“They fined me because they paid two euros for my espresso. This can’t go through, it can’t happen. Help me!!!” the message accompanying the video reads.

“I’m not one to use social media to complain, but this time they have touched a nerve with something that is too important to me and to the entire hospitality industry and particularly the coffee/café world.”

In a subsequent video published on Monday, Sanapo said he didn’t take issue so much with the fine in itself, which he said he would pay, but with Italy’s fixation on having access to cheap coffee at the expense of good quality.

READ ALSO: Where, when and how to drink coffee like an Italian

“Think about it: with one euro you cannot pay a sustainable wage to those who produce coffee, you can’t pay for the professionalism of those who are trained to a high level in hospitality. With one euro we generate poverty throughout the supply chain, we create illegal jobs or workers who are underpaid even when all goes well. A one euro cup of coffee means using poor quality products,” he told the Repubblica news daily.

Sanapo’s peers in the Italian coffee industry have expressed solidarity with his situation.

“We stand in solidarity with our colleagues at Ditta Artigianale. This is 2022 but in Italy you still can’t talk about quality when it comes to coffee, in this sector quality is not appreciated: this is very serious,” Serena Nobili from Dini Caffe reportedly said.

“To disregard the quality of a product where there is a lot of work behind it is something that I am deeply saddened by. Quality is paid for and it is to everyone’s benefit,” echoed Alessandro Vittorio Sorani, president of the small business association Confartigianato Imprese, according to Firenze Today.