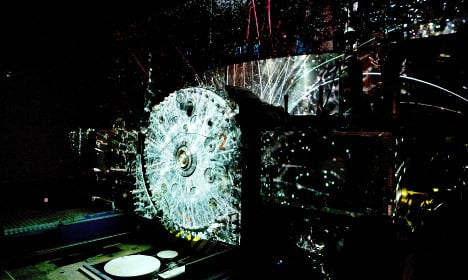 One researcher has faced disciplinary action so far for ripping down the group's posters, LGBT CERN wrote on their website since Sunday, and the group has been working with the lab's diversity office.

An article by The Sunday Times this weekend drew further attention to the issue, reporting that some had found messages like “swine” on the posters, or quotes from the Old Testament book of Leviticus, which states that a man lying with another man “as he lieth with a woman” is an “abomination”.

While the group has said that The Sunday Times article was “factually accurate,” some members also said the situation is not as bad as it sounds in the report.

“Poster removal is unfortunately a common occurrence, but more serious events, such as the 'Schwein' grafitti or threats like the Leviticus posting are thankfully rare,” the group wrote

“Issues affecting LGBTQ* scientists go far beyond the laboratory, and in some parts of the world it is not safe for out LGBTQ* people to walk the streets. As scientists who attend conferences across the world, this places limits on our safety and ability to collaborate internationally,” the group continued.

Still, the group has said that for the most part, CERN, the world's biggest physics lab famous for its Large Hadron Collider, has been supportive of their members.

Reports of discrimination against LGBT CERN has been an ongoing issue, in particular with people targeting the group's posters. Last April, one Twitter user wrote that they saw someone had posted the CERN code of conduct over a club poster and written “I find this offensive, you could be more discreet”.

Somebody has stuck the CERN code of conduct over an LGBT club poster and written “I find this offensive, you could be more discreet” on it.

Others had posted pictures of what looks like someone trying to rip up or rip off the posters.

Despite recent progress, it can be easy to forget that LGBT people still face discrimination, even at #CERN. pic.twitter.com/cvbiuFbKQ5

The problem became so big that last summer, former director general of CERN Rolf Heuer wrote a message in the CERN bulletin in response, saying that he condemned the defacement of the posters.
“Such acts are clearly in breach of our Code of Conduct, and the perpetrators, if identified, will be dealt with accordingly,” Heuer wrote.
“I encourage you all to show respect to your neighbours, regardless of their individual differences. Doing so is part of CERN’s identity. It is part of our humanity.”
Unlike many of its western European counterparts, Switzerland still has not legalized gay marriage and only recently took a step towards same-sex couples adopting children together. The senate voted earlier this month in favour of allowing one person in a same-sex civil partnership to adopt the child of the other partner.
Last week, a man made headlines with his story of being forced into therapy to “cure” his homosexuality when he was 15, leading to calls from some politicians to ban such programmes in Switzerland for minors.
Raphael Warnke contributed reporting.