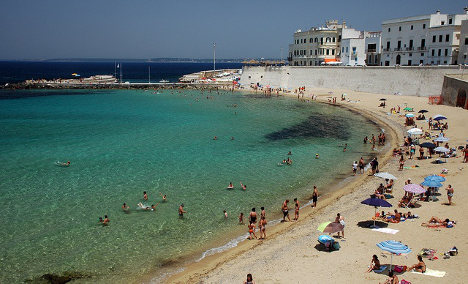 Some 150,000 refugees could land on Italy's shores as a result of the 'Balkan route' closure, the region's president, Michele Emiliano, said last week. Photo: Pug Girl

Fears were stoked after Puglia’s regional president, Michele Emiliano, said last week that as many as 150,000 refugees could arrive this year now that the route between Greece and northern Europe has been blocked.

The route closure could see refugees instead crossing to Puglia over the Strait of Otranto from Albania, which borders Greece.

The region’s coastguard has been on high alert since Serbia and Macedonia shut off their borders last week.

Meanwhile, Italian authorities, worried about a repeat of 1991, when thousands of Albanian refugees made the same journey following the collapse of communism, have also despatched police officers to Albania to strengthen border controls.

“The situation is calm right now, but if it does reach significant proportions it will severely hurt tourism,” Francesco Caizzi, the president of Federalberghi, the Italian hotel association, for Bari province, told The Local, adding that hotel owners had voiced their concerns during a recent meeting.

Although hoteliers have not reported an impact on bookings so far, he warned that the region “needs to be prepared”.

“The tourism sector is strongly affected by certain influences – just look at what happened in Lampedusa, where tourism has been hurt since the island became a place for thousands of migrants.”

Interior Minister Angelino Alfano has moved to calm the fears, saying last week that there was no evidence, at least not as yet, of the number of refugee arrivals in Puglia intensifying.

Others in the region have also played down concerns, saying that Puglia, with its coastline stretching over more than 800km, is more than equipped to deal with large numbers of refugees.

“I’ve said this several times before – this refugee 'upheaval' is not happening,” Mauro Della Valle, the Salento president for Federbalneari, an association for beach-side resorts, told The Local.

“Also, the refugee phenomenon in Puglia is not new – it’s been happening for years. We can’t compare it to Lampedusa, which is small. Puglia has a long stretch of coastline.”

Della Valle added that town and city mayors are preparing for any increase in arrivals, with shelters being set up across the region.

A so-called 'hotspot' has also been established in the port of Taranto to help facilitate the speedy processing of refugee arrivals.

“This is a humanitarian emergency, and we will react how we’ve always done – by being welcoming. Besides, refugees don't want to stay here, they want to move on to northern Europe.”

But the route towards the likes of Germany from Italy is also looking increasingly precarious after Austria’s Foreign Minister Sebastian Kurz called for further border controls on Sunday, saying that he wants to shut off the Italian Mediterranean route into Austria.

To date, the main route into Italy for refugees has been through Sicily. Eighty percent of the 153,000 who arrived in Italy in 2015 landed in Sicily from Libya and Egypt, according to figures from the International Organization for Migration (IOM).