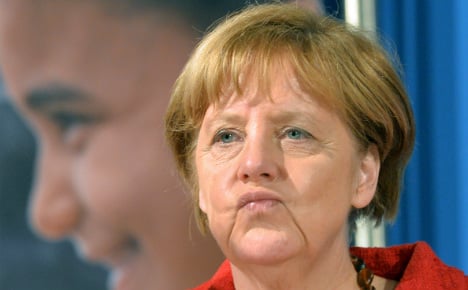 Vice Chancellor Sigmar Gabriel of the centre-left Social Democrats put his finger on the problematic issue.

“Some in Germany are secretly rejoicing that the Balkan states are reducing the influx with border closures and, in a way, doing the dirty work for Germany,” he told Bild daily this week.

Gabriel labelled this view “cynical” and said that, unless the EU finds a truly collective response, “refugees will look for new routes and in the end the Mediterranean will again become a mass grave.”

Others have observed that Merkel can now continue to claim the moral high ground while, far away, tens of thousands of refugees are trapped in the mud of Greek tent cities.

“The chancellor has got lucky once again,” judged the Neue Osnabruecker Zeitung daily. “The ugly images are from outside Germany.

“All this has happened against the officially declared will of Angela Merkel, who at the EU summit on Monday still resisted wording that declared the Balkans route closed.

“Now the Balkan countries have created facts on the ground. And yet Merkel can just lean back for now. Declining refugee numbers are a relief for the CDU before the state elections.”

Bavarian state premier Horst Seehofer — who has harshly criticised Merkel for allowing in over one million asylum seekers last year — has stated bluntly that Germany was the “main beneficiary” of the closure of the Balkans transit route.

Merkel's image changed dramatically last September from eurozone austerity champion to protector of refugees after she opened German borders to a mass influx of people fleeing war and poverty.

The historic migrant wave has earned Merkel much praise but also sparked a right-wing populist backlash expected to take a toll on her CDU at the ballot box on Sunday.

De Maiziere in Brussels this week openly hailed the reduced refugee numbers, saying “the days of just having them through are over”.

The opposition Greens party also criticised what at times appears like a good cop, bad cop routine as a “contradiction within the federal government”.

“You really have to say that it's cynical to on the one hand celebrate the arrival of fewer refugees while also criticising the border closures and unilateral actions of some countries,” said Luise Amtsberg, the party's spokeswoman of refugee issues.

“It's clear that this doesn't fit the position which the chancellor is representing to the outside.”

Elsewhere in Europe, many have long accused Merkel of accelerating the influx with her open-door policy, symbolised by posing for “selfies” with migrants.

Slovenian Prime Minister Miro Cerar rejected Germany's criticism that his country had acted “unilaterally”, while accusing it of double standards.

“We note a strange discrepancy between what the government says in public and what is de facto happening at the German borders,” he told Die Welt daily.

Austrian Chancellor Werner Faymann has also complained about a split in German position on refugees where “some say they should come, and the interior minister tells Austria to stop waving them through”.

Austria's tabloid Kronen Zeitung attacked Germany more bluntly, asking: “Why don't you start an 'airlift of hearts' and send the fattest jets in your Lufthansa fleet to Athens and Istanbul?

“But please don't force us Austrians, Slovenians, Czechs, Slovaks, Hungarians, Serbs and Macedonians any longer into the very awkward role of the evil bouncer at the entrance to your multicultural land of plenty.”