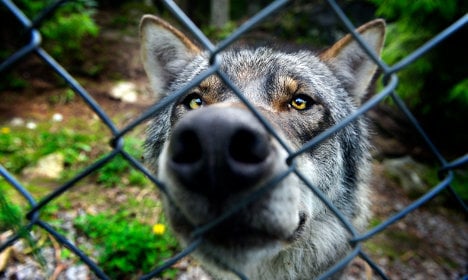 A wolf at the Kolmården Zoo in Sweden. Photo: Tomas Oneborg/SvD/SCANPIX

The never-before-seen clip was published on YouTube by an anonymous user last month, but only went viral on Wednesday after it was written about by Swedish hunting magazine Jakt och Jägare.

It shows a group of military dog handlers interacting with the wolves inside their enclosure at the Kolmården Zoo, near Norrköping in central Sweden, in 1996 as part of a study visit.

The pack act friendly and sociable, and one of them even lets a soldier cuddle him. But then the mood changes. The animal bites on to the man's jacket and refuses to let go. The female zookeeper steps in to interrupt what still appears to be mostly playful behaviour – when suddenly the wolf attacks.

The woman, who only manages to fend off the wolf by repeatedly kicking it in the stomach, is forced to wrestle the apparently aggressive animal who gets up on its hind legs before it eventually gives up.

“This was not a normal situation and this is not how the wolves usually react. Normally, the wolves will fold because they see the keeper as dominant. This one didn't in this case, so she was forced to act as resolutely as she did,” Mats Amundin, head of research at Kolmården, told The Local.

He still remembers the incident 20 years later and explains that the soldier had been carrying dog sweets in his pocket at the time, which had sparked the wolf's initial interest.

“You can only speculate about what would have happened if the keeper hadn't acted the way she did, and we try not to. (…) But the visitors were never in danger, this was between the keeper and the wolf. And you can tell that there is even something going on there between the wolves as well.”

The video is not linked to another high profile incident at the zoo in 2012, when a zookeeper was mauled to death by the wolves, which prompted Kolmården to stop allowing visitors or staff inside the enclosure.

There are believed to be around 300 wolves in Sweden. They are reserved animals, but concern has been rising following reports of attacks in recent years. Last autumn a Swedish man told The Local his town was growing scared after a wolf snatched his daughter's puppy right in front of his eyes.

However, Amundin explains that incidents are rare and that most wolves will avoid humans.

“You can completely trust that they will stay away, but if you want to make sure you should make noise and wave your arms around. If you're afraid of wild animals in the forest, such as bears or wolves, you can whistle or talk to yourself and they will hear you and stay out of your way.”