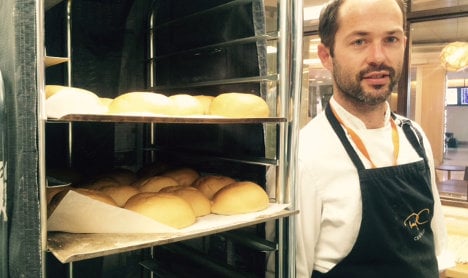 Manager Joakim Blomqvist inside the airport bakery. Photo: Private
The smell of fresh bread fused with the aroma of Sweden's world-famous cinnamon buns hits you the moment you step inside RC Chocolat, the Nordic nation's first airport bakery.
Staff are busy kneading organic dough, sprinking sugar on top of beautifully pleated sweet pastries and wrapping up hamburger rolls, which are sold both to passing travellers and guests staying in the terminal's largest hotel.
On the other side of the room, the company's fridge is home to a range of sourdough mixtures – yeast-filled so-called “starters” that need to be kept cool and regularly “fed” with flour and water in order to stay alive. Joakim Blomqvist heading inside the fridge where the sourdough starters are kept. Photo: Private
But some of the jars filled with the soggy blends are never cooked on the premises, nor sold to a single customer. Instead, they are merely given a temporary home after being dropped off by Swedish travellers looking for a safe place to store them while they jet off on ski trips or head to sunnier climes.
“We like to be confidential so we don't keep any records. The customers like it that way,” says Joakim Blomqvist, who manages the store, which opened in 2014.
But the baker admits that up to 70 travellers have asked RC Chocolat to “babysit” their doughs while they are away on vacation.
“They are all different ages, a lot of them are hipsters. Maybe they are trying to be a bit trendy or want to learn new things.”
The company does not advertise the service, with Blomqvist explaining it evolved due to bread-loving passengers “asking a lot of questions” when its airport branch was launched. Travellers now hear about its work by word-of-mouth, Facebook and Instagram, he says.
VIDEO: What's the fuss about Sweden's semla bun?
Sourdough is created by mixing flour and hot water and leaving it until little bubbles form, making a natural yeast containing a lactobacillus culture.

As long as this starter culture is fed flour and water weekly, it can stay at room temperature indefinitely.

Blomqvist says two customers are scheduled to deposit their living starter mixtures this week, during the half term holiday in Sweden. The vacation period is named “sportlov” because so many families use the time to engage in traditional Nordic sports such as cross-country or downhill skiing.
“We will keep the sour dough alive for them while they are away and keep them happy,” he explains. Sourdough made by the bakery on sale at Stockholm's Arlanda airport. Photo: Private
Baking sourdough has been trendy in Sweden for several years and the world's first hotel for starters launched in the centre of Stockholm in 2011, although it closed in 2014.
However Blomqvist says he is confident that the airport bakery will survive much longer, due to its “convenient location”.
Sweden has a long love affair with baked goods, from cinnamon buns to cream and almond-paste packed semlor, and the baker argues that the country's historic obsession with bread and cakes has likely played a role in the recent revival of sourdough cultivation.
He also cautiously agrees with The Local's theory that the Nordic nation's famously short business hours might be a factor in Swedes being able to take up the the complex and time-consuming hobby.
“Well, maybe! When you are working with sourdough you sometimes need to rest it for up to 60 hours!” he laughs.
While Blomqvist clearly enjoys looking after starters for customers, he says some clients can be “pretty stressed” about the experience and admits that he and his staff also look forward to the moment when the sourdough gets collected.
“As you can imagine they are more relaxed when they come for the pickup, because they've been away on holiday! They really care about this sourdough, they treat it like kids.”
Url copied to clipboard!