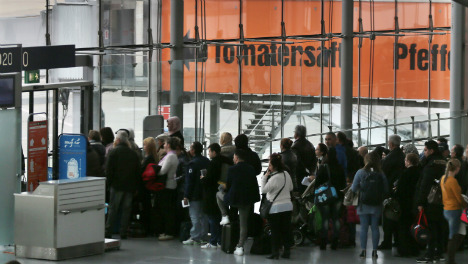 Terminal two was completely cleared of passengers after the woman ran straight through the security queue just after 10 am. Police searched for explosives with specialist dogs but found nothing.

Five planes were prevented from taking off on time and one was cancelled, as passengers who had already boarded had to be evacuated and aircraft searched.

Some disappointed passengers expressed their frustration on social media.

“Cologne to Munich flight expected at 10:90 am – oh and the terminal is being cleared,” one wrote.

“The terminal is still totally locked down and my flight has been completely cancelled,” another said.

Police quickly identified and arrested the woman using surveillance camera footage and said “we can rule out a terrorist background” to the incident.

Plain-clothes copper in a hurry

But Bild explained the background a little later in the afternoon after the police had got all the facts straight.

“Apparently she was saying 'I'm exempt from the air security checks,” a federal police spokesman told the tabloid.

While the officer was holding her ID badge high in the air as she charged through security, that didn't mean she could in fact go straight through without being checked.

“Of course this is very annoying for passengers, but security has to be our highest priority,” a police spokesman said.

“In the end it was a lot of fuss for nothing,” he added.