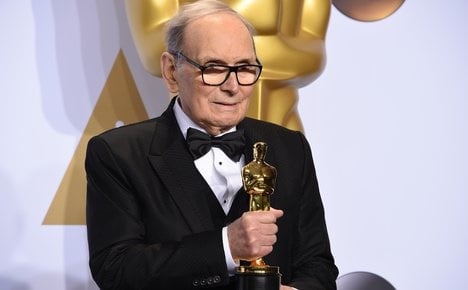 Still working at 87, the Italian composer has created the music for some 500 films over the course of a 55-year career that took off as a result of his work for his childhood friend Sergio Leone's “Spaghetti Westerns” of the 1960s.

“My tribute goes to the other nominees, and in particular to the esteemed John Williams,” Morricone said through a translator.

“There isn't a great soundtrack without a great movie that inspires it. I want to thank Quentin Tarantino for having chosen me to make this extraordinary (score).”

His compositions for films such as “The Good, the Bad and the Ugly” used combinations of whistling, yodelling and rare wind instruments to brilliantly evoke the atmosphere of the American frontier.

Despite their originality, the Leone westerns – Morricone does not like the 'spaghetti' description – failed to earn him an Oscar nod.

But the Rome-born son of a trumpeter went on to be nominated no fewer than five times before the Academy of Motion Picture Arts and Sciences, embarrassed that such a talent had not been recognised sooner, presented him with a lifetime achievement award in 2007.

He said that night that he intended to carry on working with the same passion and dedication he had brought to every previous project, and he has proved true to his word.

On the day he received news of his sixth nomination for “The Hateful Eight”, he was rehearsing with a 90-strong orchestra for the latest leg of a world concert tour that will next month take him to Moscow and Helsinki before concluding in May with dates in his native Rome and Paris.

Although he is most closely associated in the public mind with Leone's Westerns starring Clint Eastwood, Morricone's composition for Roland Joffe's Jesuit drama “The Mission” is considered by many critics to be his cinematic masterpiece, an epic and eclectic reflection of South America's musical melting pot.

The decision to award that year's Oscar to the jazz soundtrack for Bertrand Tavernier's “'Round Midnight” is considered one of the most controversial in the Academy's history. Morricone admitted to Britain's Guardian newspaper last month that he had felt robbed.

The composer told AFP in a December interview that he does not know when he will stop what was only supposed to be a dalliance with movies similar to the time he spent writing Italian pop songs.

“My real purpose was to write classical music,” he said. “Since the conservatoire (music school), that was my ambition. Then, of course, you have to live — and you can make money from film music. That's just how my life went.”

Morricone's impressive list of credits includes “The Battle of Algiers”, “Once Upon a Time in the West”, “La Cage aux Folles” and “Cinema Paradiso”.

After his collaboration with Leone, he went on to work with Italian screen legends Federico Fellini and Pier Paolo Pasolini and later with the likes of Pedro Almodovar, Bernardo Bertolucci, Brian De Palma and Oliver Stone.

But he readily admits he was not initially keen when another groundbreaking director, Tarantino, came calling, fearing he would be asked to rehash his work with Leone.

“He came to my house to talk to me and told me about his appreciation for my work, for cinema,” the composer told AFP. “He convinced me to compose for him.”

The end result of that conversation was a score featuring 50 minutes of original music that won Golden Globe and Bafta awards before Sunday's triumph in Hollywood.

Morricone said he had wanted to do justice to Tarantino's “beautiful and interesting” script with something equally original.

“I wanted it to have its own sounds. I didn't want the music to be the leftovers of what I did for Leone.”