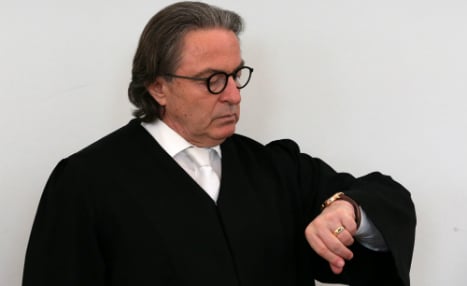 A lawyer checks his watch as the court waits for the former SS man to arrive. Photo: DPA

Chief judge Klaus Kabisch put the trial in the northeastern town of Neubrandenburg on hold shortly after it opened, saying a doctor who examined the defendant on Sunday found that he had “suicidal thoughts, and was suffering from stress reaction and hypertension”.

He was therefore “not in a state” to be transported to the court or to be heard, the judge said.

Zafke was working at the Nazi death camp from August 15 to September 14, 1944, a period when teenage diarist Anne Frank was interned.

Prosecutors charge that by serving there, the former medical orderly “knew of and willingly supported the industrially organised mass killing people in an insidious and cruel manner”.

But Zafke's ability to stand trial has been a key contention.

A first court had ruled against a trial, finding that he was suffering from dementia, but an appeals court overturned the decision.

It found that, despite his “cognitive impairments” and diminished physical capacity, the defendant could be granted regular breaks and close medical supervision.

Shortly before Monday's hearing, the prosecution had also sought, but failed, to have the panel of judges recused on the grounds that they were biased towards declaring Zafke unfit to stand trial.

Following Kabisch's decision, prosectors filed a motion for a second medical opinion on the health condition of Zafke, which would now be examined by the court.

Given Zafke's advanced age, the court has only set an initial two further hearing dates, March 14 and 30.

Zafke risks between three and 15 years in prison, but even if convicted, he is unlikely to serve any time.