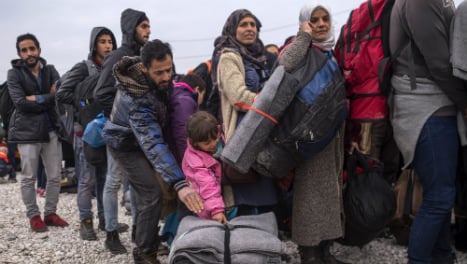 Refugees on the Greece-Macedonia border on Wednesday. Photo: DPA

“Money for other things we might want is simply not there, even if the numbers look different at first sight,” junior finance minister Jens Spahn told the Sueddeutsche Zeitung (SZ).

Other government sources told the Munich-based newspaper that ministers are reckoning with up to 3.6 million refugees living in Germany by 2020.

That's likely to gobble up all of the record €19.4 billion surplus the government took in last year in taxes – and possibly even mean cuts to budgets elsewhere.

The entire surplus is “by law completely reserved for financing the refugee crisis,” Spahn said.

Meanwhile, Finance Minister Wolfgang Schäuble remains committed to achieving his target of a “schwarze Null” – a “black zero” with no new debts on the bottom line of his books – and that could mean cuts elsewhere.

“Refugee numbers have to sink, or else we won't be able to manage any more,” Schäuble told reporters before leaving for a G-20 meeting in Shanghai on Wednesday.

Other ministries are already petitioning Schäuble to maximize their budgets from now until 2020.

The Finance Ministry told the SZ that it was impossible to predict exactly how many people might arrive in Germany as refugees in the coming years.

Internal figures are based on roughly half a million people arriving every year between 2016 and 2020 – which added to the 1.1 million who arrived in 2015 would make for a total of 3.6 million.