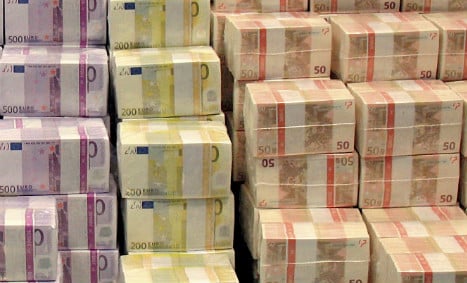 Germany notched up an overall surplus of €19.4 billion on its public budgets last year, “which in absolute terms is the highest since unification” in 1990, the office said in a statement.

Under eurozone rules, member states are not allowed to run up deficits in excess of 3.0 percent of GDP and are obliged to bring them into balance or surplus in the medium term.

Last year was the second year in a row that Germany's public finances have been firmly in the black.

At the same time, the statistics office confirmed a preliminary estimate that the economy expanded by 0.3 percent in the fourth quarter of last year, the same rate of growth as in the third quarter.

“The economic situation in Germany in 2015 was characterised by solid and consistent growth,” the office said.

Across the whole year, GDP grew by 1.7 percent.

Public spending increased by 1.0 percent in the fourth quarter and household spending edged up by 0.2 percent.

In addition, investment increased with construction investment expanding by 2.2 percent over the three-month period and investment in equipment rising by 1.0 percent, driven primarily by public investment.

By contrast, foreign trade had a dampening effect on fourth-quarter growth with exports falling by 1.7 percent and imports slipping by 0.6 percent, Destatis calculated.

JOBS
EXPLAINED: What is the 13th-month salary in Switzerland and how is it calculated?
Url copied to clipboard!