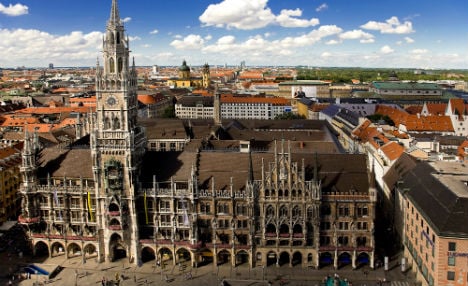 The survey by Mercer put together a list of the 230 world cities with the best standard of living and rated Munich (4), Düsseldorf (6) and Frankfurt (7) all worthy of a place in the top ten.

With Berlin, Hamburg, Stuttgart and Nuremberg all also ranked in the top 25, no other country in the world had such a wealth of metropolises at the top of the tables.

Catching the waves in central Munich!! It's a bit too cold now, so Mario Danns asked to come back in spring and he will introduce us to first and second waves of Eisbach (Isar), small manmade river in the city centre. River surfing on standing waves has been documented as far back as the early-1970s in Munich. Today it's offering the world's largest urban surfing spot

“In the top 20 or 30 places there is really very little difference between the cities, with all of them enjoying a very high standard of living,” Stefan Zwink, Mercer spokesperson in Germany, told The Local.

The German cities were generally marked out by top quality public infrastructure, living spaces and variety of leisure activities, he explained.

What edged Munich above the other cities in the Bundesrepublik (Federal Republic) was the quality of its airport and its public transport system, Zwink noted.

Actually been to #Düsseldorf for the first time ever, so thank you for yesterday's sunset! #dreischeibenhaus pic.twitter.com/9RCgzeFvPO

Of the other major world economies, the first city to appear on the list was San Francisco on the west coast of the USA which was ranked at number 28.

Generally European cities dominated the top of the charts, with Vienna being chosen as the city with the best quality of living in the world.

Of the top ten cities, European cities took seven of the places, while also dominating a separate list of the safest cities in the world.

The Mercer survey is conducted to inform companies on how best to compensate employees when they send them on foreign assignments, the company says.

“Heightened domestic and global security threats, population displacement resulting from violence, and social unrest in key business centres around the world are all elements adding to the complex challenge facing multinational companies when analysing the safety and health of their expatriate workforces,” said Ilya Bonic, Senior Partner and president of Mercer’s Talent business.