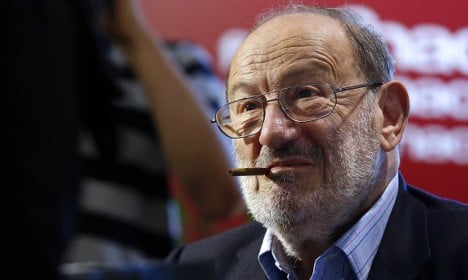 The late writer's new book is out on Friday. Photo: Francois Guillot/AFP

“Pape Satan Aleppe. Chronicles of a Liquid Society” is a collection of essays that have appeared in Italian weekly L'Espresso since 2000, publishers La Nave di Teseo said Sunday.

The meaning of the words has sparked numerous interpretations, but for Eco it is “sufficiently 'liquid' to characterise the confusion of our times”, according to a summary available on Amazon written by the author.

The book was originally due for publication in May, but the date was brought forward after the writer's death.

Eco, the literary and intellectual phenomenon who wrote mediaeval thriller “The Name of the Rose”, died at his Milan home on Friday, aged 84.

La Nave di Teseo, which announced the release date on its Facebook page, is a new publishing house that emerged after notable writers, including Eco, moved to protect their independence and editorial diversity after the birth of a publishing giant in Italy.

RCS, whose main shareholder is automaker Fiat Chrysler Automobiles, groups a number of publishing houses, such as Rizzoli and Bompiani, which releases works in Italy by Eco and France's Michel Houellebecq.

The deal gave birth to a publishing giant which has a market share of around 40 percent in Italy.