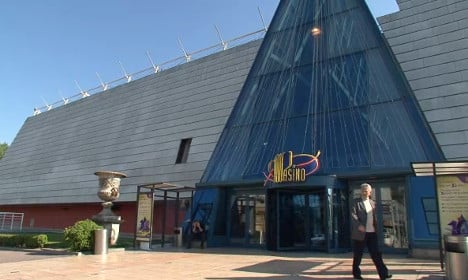 The robbery took place at around 2am on Saturday morning when 700 clients were trying their luck at the “Pasino” in Aix.

The men burst in and opened fire with their Kalashnikov assault rifles. They fired up at a glass roof, but caused no injuries.

Nevertheless those inside feared they were being targeted by a terror attack and fled for their lives, provoking a stampede.

“People were trampling over those who had fallen over, it was the behaviour of animals,” Cédric Aubert, who was inside the casino told France 2 television.

“In a split second, there was a movement of panic through the entire casino,” another eye witness, named Hugo, told France Info. “People were throwing themselves under tables.”

But the witness said after seeing one assailant in a balaclava he realised the casino was being targeted by robbers rather than by terrorists.

“I told people around me it was a robbery and not an attack,” he said.

Word of the casino being under attack briefly spread on social media sites in France.

When firefighters arrived at the scene they had to treat around a dozen people who were injured during the stampede or left in shock by the panic.

According to reports the robbers only escaped with a booty of around €3,000. On Monday morning they were still on the run.

On Saturday a car with several guns was stopped by Spanish police and one man was arrested. Initial reports suggested the arrest was linked to the casino robbery but this has since been denied.