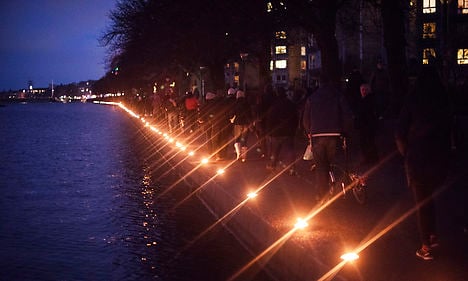 Danes commemorated the day with a chain of candles through Copenhagen. Photo: Ólafur Steinar Gestsson/Scanpix
Prime Minister Lars Løkke Rasmussen left flowers outside the cultural centre and the synagogue targeted on February 14, 2015 by Omar El-Hussein, a 22-year-old Dane of Palestinian origin.
“The Danes have shown that we insist on living our peaceful life,” Rasmussen told journalists.
“And that is perhaps the most important message we can send here today — that we will never give in, we will never give up.
“We're in a situation where there is still a serious terror threat against Denmark — that is unchanged. But it is also a situation where we have acted… We have equipped our intelligence service, we have equipped our
police.”
El-Hussein had opened fire with an automatic weapon at the cultural centre where Swedish cartoonist Lars Vilks — reviled by Islamists for portraying the Prophet Mohammed as a dog in 2007 — was attending a conference on freedom of expression.
Danish filmmaker Finn Nørgaard, 55, was killed and three policemen were wounded. After managing to escape, the assailant shot a 37-year-old Jewish security guard, Dan Uzan, in front of a synagogue, also wounding two police officers.
El-Hussein, seemingly inspired by the attacks on French satirical weekly Charlie Hebdo, was killed a few hours later in a shootout with police in Copenhagen's immigrant-heavy Nørrebro district.
Later on Sunday, Rasmussen was set to attend an event at parliament organised by the Finn Norgaard Association, a charity for immigrant youngsters set up in the filmmaker's name.
“What we want in the association is to ensure that something as insane as what took Finn away from us does not happen again,” its founder Jesper Lynghus told AFP.
After nightfall, the two victims will be commemorated with a chain of 1,800 candles lit on a 3.6 kilometre (2.2 mile) route between the two locations attacke, with a heavy police presence expected.
Police turned out in force as cartoonist Vilks returned to Copenhagen on Saturday for another event on freedom of expression — held inside parliament for security reasons.
“It's a shame that you can't be anywhere else. We have to be in a 'fortress',” Vilks told AFP.
El-Hussein, who had been released from prison weeks before the attacks after serving time for a stabbing, pledged allegiance to the Islamic State jihadist group on his Facebook page on the day of the attack.
Danish intelligence agency PET was criticised for failing to act on information from prison services that he was at risk of radicalisation, and former classmates said they tried to warn police as far back as 2012.
Four men charged with helping El-Hussein will appear in court next month.
Danes “have become used to living with terror and don't let it dominate” life, Magnus Ranstorp, an expert on radical Islamic movements at the Swedish National Defence College who helped Copenhagen officials devise an anti-radicalisation plan, told AFP.
Nearly every year in the past decade, authorities have thwarted attacks linked to Denmark's involvement in the Iraq and Afghanistan wars, and to the Mohammed cartoons published in the Jyllands-Posten newspaper in 2005, Ranstorp said.
Denmark's already tough tone on Muslim immigration has become even tougher over the past year, partly as a result of the attacks but also due to Europe's refugee crisis.
Denmark registered 21,000 asylum applications in 2015, making it one of the top European recipients of refugees relative to its size.
Once a champion of refugee rights, attitudes have gradually shifted along with the rise of the anti-immigration Danish People's Party over the past 15 years.
And some observers say there has been an increase in anti-Muslim rhetoric since the attacks.
“Some people have used this shooting episode to bring forward their hate speech, it has become a little clearer than before,” said Sami Kucukakin, chairman of an umbrella group for Danish Muslim organisations.
Url copied to clipboard!