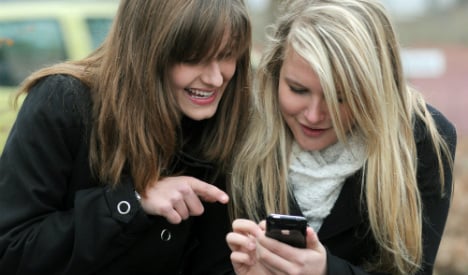 "...and if you leave out the adjectives, you can forget about the Dative!" Photo: DPA

Linguist Diana Marossek has collected dozens of examples of SMS-style 'Kurzdeutsch' (short German) in a new book, Kommst du Bahnhof oder hast du Auto? (You coming station or do you have car?).

That's leaving out some of the parts of German – articles, prepositions, and the troublesome case system and adjective endings that come with them – that often cause German learners the most trouble.

In fact, the way this Kurzdeutsch is constructed is reminiscent of the way many people with a migrant background speak and write, although it's increasingly popular with native speakers, linguists say.

“Such expressions are used when someone wants to sound young,” said Ludwig Eichinger, director of the Institute for the German Language.

And social media as well as texting have their role to play.

“If it's really important to be brief, then there's a high likelihood that such structures will play a role,” Eichinger noted. “You leave out whatever isn't completely necessary.” “This Kurzdeutsch is even worse than trying to text with Bavarians.” File photo: DPA

“You chat with your mother in the same way as with your mates” on Facebook or WhatsApp, Marossek agreed, explaining that these are new spaces with no particular standards of conduct.

Many researchers also see Turkish influence on the new speech style – although phrases like “Ich bin auf Arbeit” (I'm at work – shortened from “Ich bin auf der Arbeitsstelle”) have long been current in Berlin and elsewhere, said Melanie Kunkel of the Duden publishing house (which publishes the most widely-used German dictionaries).

The Turkish language itself has neither articles nor prepositions.

“The more widespread this way of speaking is among young people, the more influence it has, little by little, on adults without a migratory background who have a lot to do with it in their job or otherwise,” Marossek found out.

During her undercover research in German schools, Marossek even heard teachers using Kurzdeutsch amongst themselves in private – noting phrases such as “Welches Kino geht ihr denn?” (Which cinema are you going?).

“Teachers of course bring it home, and that's how it spreads.”

No fear for end of 'high German'

But Marossek sees little danger that the slangier way of talking will displace classic high German.

It's more likely that Kurzdeutsch will fade away after a generation – or remain firmly stuck in a niche of very informal registers.

“Phrases like 'Kommst du Bahnhof' are even thought of as slangy by the people using them,” Kunkel said.

“Most people who use them are in a position to switch to the standard language depending on the situation.”