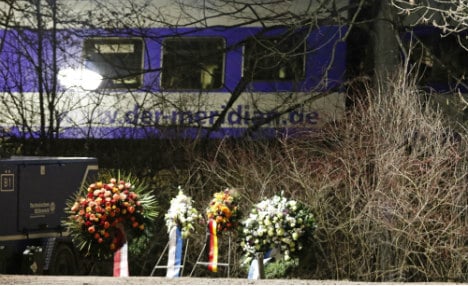 Using a special phone network which allows the control station to communicate directly with drivers, the controller tried to alert the train drivers to the imminent danger, investigators told the Süddeutsche Zeitung on Friday.

The distress signal should have alerted the drivers to put on their breaks.

Immediately afterwards the controller tried to alert the drivers a second time, but by this stage it was already too late.

The activity on the mobile line was recorded and is now being studied by a team investigating the cause of the crash.

The third black box, which was not immediately found, has now also been recovered and is being analyzed, which should lead to a full understanding of the events leading up to the crash.

Investigators currently believe that the controller mistakenly allowed both trains to enter the single stretch of track at the same time.

While a warning signal is supposed to be set off in such circumstances, it is possible to circumvent it.

If this is how events took place it would seem the controller only noticed his mistake at the last second – as indicated by the use of the emergency call.

Some of the seriously injured passengers of the two Meridian trains – which collided early on Tuesday morning – are still in a fight for their lives, police say.

The latest victim of the tragedy – a 47-year-old man – died on Thursday evening.

Twenty people are still in hospital in a serious condition. A further 62 were lightly injured in the crash.

Police are optimistic of having the stretch of track free of debris within the coming days, with normal service set to resume once test rides have been successfully conducted.

SEE ALSO: Why the Bavaria train crash should never have happened