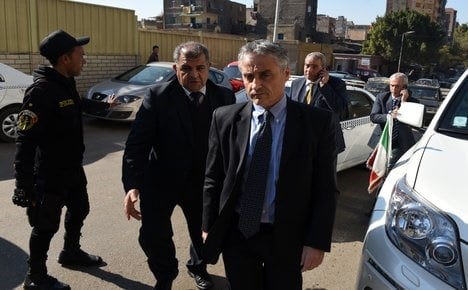 Speaking to national broadcaster RAI from London, Gentiloni urged Egypt to allow Italian experts to take part in the investigation into the 28-year-old's death “because we want the truth to come out, every last bit of it.”

“We owe that much to a family that has been stricken in an irreparable way and, at the very least, has the right to know the truth.”

In an incident threatening to badly sour diplomatic relations between the two countries, Regeni's half-naked and badly beaten body was found dumped in a ditch on the outskirts of the Egyptian capital on Wednesday.

The PhD student had suffered cigarette burns to his face and feet and had bruises and other wounds over his body, leaving prosecutors in no doubt that he was murdered.

In Cairo to work on his doctoral thesis, Regeni had disappeared on January 25th after leaving his home to meet a friend downtown.

Italy is one of Egypt's most important trading partners in Europe and the two countries have long had a close relationship.

The foreign ministry said Italy expected “the maximum cooperation from the Egyptian authorities at every level in light of the exceptional gravity of what happened to our compatriot and the traditional bonds of friendship between the two countries.”

The Egyptian ambassador was also informed that Italy wants its own experts to be fully involved in a joint investigation into what happened.

The ministry said the ambassador, Amr Mostafa Kamal Helmy, had given assurances that the Egyptian authorities would do their utmost to find those responsible for “this criminal act.”

Economic Development Minister Federica Guidi, who was in Cairo when Regeni's body was discovered, cancelled the final day of a trade mission involving some 60 Italian companies in reaction to the news.

Hours earlier she had, according to the Italian media, urged Egyptian President Abdel Fattah al-Sisi to intervene personally in the investigation into Regeni's disappearance, underlining the potential for the case to disrupt normally close diplomatic ties between Rome and Cairo.

Regeni, whose studies included Arabic and Arab literature, was from Fiumicello near Udine in northeastern Italy.

He was in Cairo doing research for his doctoral thesis and was last seen on January 25th when he left his suburban home with the intention of travelling by metro to meet a friend in the city centre.

Cairo was extremely quiet on the day he disappeared as a result of the authorities having ordered a security clampdown on what was the fifth anniversary of the Arab Spring uprising which ended Hosni Mubarak's 30-year reign.

Archive photo of Blanca Fernández Ochoa during her Olympic career.

The 56-year-old — won a bronze skiing for Spain in the 1992 Winter Games in Albertville, becoming the country's first female Winter Olympic medallist — had been missing since she was last spotted on surveillance video at a shopping centre on August 24th.

Her car was later found at a parking lot near the start of a hiking trail in Cercedilla, a mountainous village near Madrid. The authorities said they are still investigating the cause of her death.

“Solidarity, support and human warmth have been felt these days in the mountains of Cercedilla. Security forces and many volunteers have taken part in the search for Blanca Fernández Ochoa. But nothing could be done. My affection to all her family,” Prime Minister Pedro Sanchez tweeted.

Hundreds of police, firefighters, forest rangers and volunteers, backed by helicopters, drones and tracking dogs, had taken part in the search for Fernández Ochoa.

Her family only alerted the authorities about her disappearance on August 29th because they said it was not unusual for her to go on hikes in the area, even without her phone, according to Spanish media reports.

Police on Saturday issued an appeal on social media for help from the public in locating Fernández Ochoa along with a picture of her, which drew media attention to her disappearance.

She was well known in Spain, where she had taken part in several TV reality shows after retiring from sports.

There is a statue in his honour in Cercedilla.

Until 2018 the brother and sister were the only Spaniards to have won medals at a Winter Olympics.

“It is a very sad day for Spanish sports,” Spain's secretary of state for sports, Maria Jose Rienda, said in a statement.