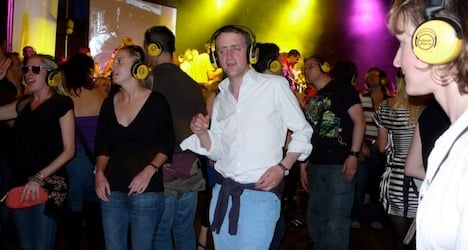 Organizers of the events, where participants dance to music listened to on wireless headphones, had wanted to hold them on the terrace and rooftop of bistros in the Flon nieghbourhood on June 12th and September 4th.

The events were to run until 5am.

Similar events have been held in the nearby municipality of Pully, run by Olivier Meylan, the director of the unfortunately named For Noise Festival, 20 Minutes reported on Wednesday.

Meylan submitted an application with the support of Mobimo, the owner of the property where the bistros are located, and a recommendation from the municipality of Pully, the newspaper said.

However, the city’s business regulation department turned down the proposal, a decision that cannot be appealed.

“Since 2014 numerous complaints from neighbours have been lodged,” Florence Nicollier, head of the department told 20 Minutes.

“They involve noise problems caused by musical events and other activities taking place on terraces of establishments in the Flon neighbourhood and the Place de l’Europe, in particular those on rooftops,” Nicollier said.

Apparently, the concern with “silent discos” is that they are not that silent, since participants often sing along to the music.

“During silent discos, the noise caused by the clientele is not negligible,” Nicollier said.

As a result, the city has decided to ban such event.

Event organizer Meylan did not hide his disappointment.

“Given our experience in the neighbouring municipality of Pully, we should have been able to at least try a test in the centre of Lausanne and take stock afterward, but no,” he told 20 Minutes.

“There is now a lack of original events in this city that are, however, popular with young adults.”