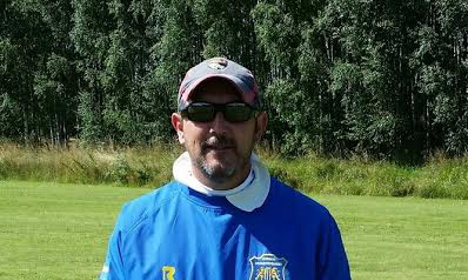 Before the move, Williman, from Ipswich, had worked in banking for 26 years, though he had played cricket for fun since the age of nine and even trained as a coach.

“It had always been my passion, but paid no money – especially not compared to banking!” he explains.

But in 2014, he and his Swedish wife Marie decided they wanted a change. They had visited Sweden regularly, and Williman says he was always impressed by the Scandinavian nation. “It’s so clean, so empty, so organized – all the things England isn’t. And suddenly we began to start talking seriously about moving.”

“You get one go at life,” says Williman. “We were both getting a bit bored with what we were doing, and with both our sons at university, it seemed like the perfect time to do something different. I felt that I had always taken an easy option in life, and now was the right time to take a risk.”

Williman moved to Blentarp in the far south of Sweden at the start of 2015, still with no fixed career plan in mind.

“Then I found out they have cricket teams here too. I joined Malmöhus Cricket Club, and the chairman there was an ex-Swedish national cricket player. He told me that cricket was about to take off in Sweden, and that with my coaching badges I could be very useful.”

Williman was invited to coach the national under-17 team, leading them to victory against Norway in a three-day match last August. “That gave me a little bit of kudos,” laughs Williman. At around this time, cricket was awarded the status of a national sport in Sweden, meaning there was government money to train coaches and provide facilities, a huge boost for the sport. “Up until then, it had been starved of resources,” Williman tells us, explaining that particularly in Sweden's harsh winter, it is important to have adequate training facilities.

He decided that the timing was right to turn his passion into a career, and launched his own cricket coaching company, drwcricket, on January 1st this year. However, he realized it might be an uphill battle when he first approached the Swedish Public Employment Service for support.

“In my first meeting, when I mentioned cricket, the woman asked ‘Is that where you sit on a horse and hit a ball with a stick?’ But somehow I convinced her and got some support for the first six months of my business.”

As well as community work and taster sessions in schools, Williman has put forward a project proposal for a cricket programme for refugees, based on a successful scheme in London.

“I want to use cricket as a vehicle to bring disadvantaged young lads together in a safe environment,” he explains. “It can help them integrate and teach the values they will be expected to follow in their new country, like respect and timekeeping.”

Cricket has helped Williman personally to integrate in his new nation. “I turned up at the club, and within three days I had 12 new mates. It has helped me meet all sorts of different people.”

Williman has also recently been named as Head of Development for Swedish Cricket and Assistant Coach to the National Team, and he says the game is “slowly growing” in Sweden.

“We’ve got around 3,000 players and 50 teams across the country, with a big hotspot in Stockholm where there are about 25 teams,” Williman tells The Local. This summer, from August 16th-21st, Stockholm will play host to the European Cricket Championship for the first time.

So how are Swedes reacting to this very British sport?

“It is still very much a minority sport, and not enough native Swedes are playing,” he admits, adding that it is often expats from places such as Pakistan, Afghanistan and Sri Lanka who get involved. But he hopes that it will catch on once Swedes realize that cricket uses the same skills as more popular sports such as ice hockey and handball. And Williman has another trick up his sleeve when it comes to piquing Swedes' interest in cricket. Williman coaches in English and says that he takes advantage of Swedes' ‘anglophilia’ to help promote the sport.

“It’s a new game taught in their favourite second language!”

In gender-equal Sweden, Williman is also focusing on including girls in the sport and is working on women's development sessions.

“It's a good sport for girls, because it's a tactical, thinking game and it isn't all about strength,” he says.

Indeed, women's cricket is a fast-growing sport worldwide, and last October, a woman played in a professional men's team in Australia.

One year after arriving in Sweden, Williman couldn’t be happier. He smiles: “I’m doing something I’ve always wanted to do in a country I never imagined I’d be living in!”