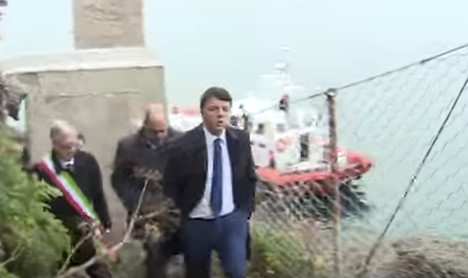 Italian Prime Minister Matteo Renzi arrives at the island of Ventotene on Saturday. Photo: Screen Grab/YouTube
“We say with force, decisiveness and courage that those who want to destroy Schengen want to destroy Europe. And we will not allow them to,” Renzi said a day after meeting with Germany's Chancellor Angela Merkel on a migrant crisis which has threatened to see freedom of movement in the European Union revoked.
Renzi was speaking during a visit to the Italian island of Ventotene, where during the Second World War two prisoners wrote a manifesto considered by many to be a key driver behind the movement for European unification.
The PM laid flowers on the grave of Altiero Spinelli, referred to as one of the founding fathers of the European Union for his co-authorship of the “Ventotene Manifesto”, which he wrote with fellow prisoner Ernesto Rossi.
“Today, in a moment of great difficulty for Europe, we decided to return here, where it all began… to pay homage to what happened during what was perhaps the most difficult moment in the history of European identity”.
Imprisoned from 1927 to 1943 by the fascist government for dissident activities, Spinelli began the manifesto in 1941 on a federation of European states which would create a bond between the countries of Europe and prevent war.
“The war seemed the natural outcome of centuries of conflict between European peoples. Yet here a few visionaries… had the courage, passion and strength to imagine a united states of Europe, a Europe as a place of peace,” he said.
European nations have adopted a raft of restrictive measures on their borders since the beginning of the year as they seek to stem an influx of asylum seekers and the migrant crisis has sparked repeated warnings over the EU's fate.
In the last few months of 2015, six out of the 26 members of Europe's Schengen passport-free zone reestablished provisional border controls, without closing the frontiers altogether.
It is not the only issue threatening the union: Britain is preparing to vote on whether or not to stay in the EU and experts have warned its exit could trigger the disintegration of the European project in the crisis-hit continent.
Italy's Foreign Minister Paolo Gentiloni this week called for an urgent meeting of the six founding countries of the union: Belgium, France, Germany, Italy, Luxembourg and the Netherlands.
“Italy will make its voice heard so that Europe does not become a grey, abstract debate on details and limits but becomes once more what it was for Spinelli and Rossi – a great dream, with the strength to move borders and break down prison walls,” Renzi said.