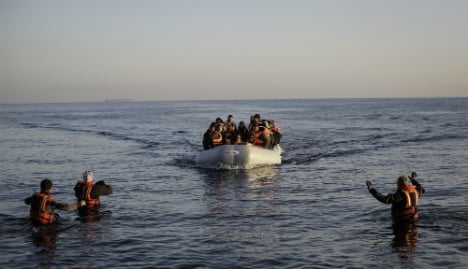 A rubber boat full of refugees arriving on the Greek island of Lesbos from Turkey on December 24th. Photo: DPA

After talks with Prime Minister Ahmet Davutoglu in Berlin, Merkel told reporters they had signed a joint communique under which “the Turkish government will do everything to reduce the number of refugees” crossing into the European Union.

“The Prime Minister emphasised the commitment of the Government of Turkey to undertaking all possible efforts to substantially reduce the number of irregular migrants in the near future,” a statement released after a news conference said. It added that Turkey “pledged to facilitate the readmission of irregular migrants not in need of protection”.

In exchange, Turkey could count on German support for easing by October EU visa requirements for Turkish nationals visiting the Schengen area.

Merkel and Davutoglu “emphasised their commitment towards meaningfully advancing the negotiations between Turkey and the EU on visa liberalisation with a view to lifting the visa requirements for Turkish citizens to the Schengen area by October 2016”, the statement said.

Friday's talks were key for Merkel, who faces intense pressure at home to impose a cap on Germany's refugee intake at a time when European public opinion is hardening against asylum seekers.

Merkel has described Turkey, which not only shares a border with war-torn Syria but is also a launchpad for thousands of migrants, as crucial to any solution to the crisis.