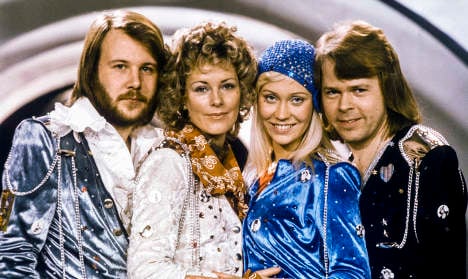 Abba back in 1974. Photo: Olle Lindeborg/TT
The warm Greek taverna inspired by the Abba-themed musical and movie Mamma Mia! has been recreated on a currently snow-covered island in Stockholm. It will open its doors to special guests and fans lucky enough to have snapped up one of the 1,340 kronor ($157) tickets at 6pm. They will be treated to Mediterranean food and a stage show partly inspired by the hit film.
Abba star Björn Ulvaeus, who is behind the project, has said that the three other band members have been invited to attend the event, called Mamma Mia! The Party, but by Wednesday afternoon it remained unclear whether everyone would show up.
Benny Andersson, Anni-Frid Lyngstad – known as Frida – and Agnetha Fältskog have not been photographed together alongside Ulvaeus since 2008 when they walked down red carpets in London and Stockholm for the film premieres of Mamma Mia!. When the long-awaited Abba museum opened in the Swedish capital in 2013, Fältskog was in the UK promoting her latest album.
Chris Williams, who runs the unofficial Abba site Abba Talk from London, told The Local that there was intense online chatter amongst fans about a potential reunion and said that “plenty of people have made the journey to Stockholm just to see if Abba are reunited, even if they have not got tickets”.
“Frida will probably be there, even though she lives abroad these days (…) The big question mark is Agnetha,” he said.
“Sometimes she has other priorities but she is always full of surprises and she clearly loves to impress and engage with her fans when the time is right for her.”
He said that he had heard guests had been asked not to take photos inside the venue and suggested that this “could be a hint” that there would be some extra special entertainment in store for fans. What the venue looks like now. Photo: Claudio Bresciani/TT
However Stockholmer Micke Bayert, who used to run an Abba fan club and has published a book about his experiences, told The Local he was not personally optimistic.
“I am not sure of all the four will show up, but at least Benny and Björn, that's my wild guess,” he said.
“I don't think all of ABBA will be there,” agreed Ian Cole, who runs another fan site, Abba Omnibus, from Sydney but has already booked tickets to the new Swedish venue for later this year.
“Certainly Björn, maybe Benny and/or Frida. Almost definitely not Agnetha. She has avoided all of these ABBA events since the Mamma Mia! movie opened,” he said in a Twitter message.
Bayert said that ticket holders would be in for a treat whichever members presented themselves. He attended a test show for the event in December, where he tucked into a menu that included olives, tzaziki, fish, salad and Greek-style meatballs followed by sweet pastries.
“And ouzo, of course! We were given a glass when we arrived,” he laughed.
“What struck me was the whole setting. You really feel like you are on a Greek island (…) It's a fun and cool idea to make a spin-off from the movie and the film. I am excited to see where it goes next – maybe London?”. The hand-signed invitations received by some of the specially invited guests. Photo: Private
The spoken parts of the current Stockholm show are in Swedish, with actors from the Nordic nation playing different characters to those in Mamma Mia! despite sharing a similar setting to the musical. They will however sing Abba tracks in English, including some that weren't included in the stage performance or movie.
However Ulvaeus told The Local at a press preview last week that a separate version was being developed for international fans.
“We've started rehearsing for a version completely in English this summer. We're also going to do an English version during Eurovision week when all the tourists are here.”

ABBA's new album, 'Voyage' for sale in Stockholm at the start of this month. Photo: Jonatan Nackstrand/AFP

“Voyage” by the Swedish quartet of Agnetha, Bjorn, Benny and Anni-Frid racked up 204,000 chart sales in the seven days since it was launched last Friday.

Sales gave the supergroup the biggest opening week on the UK album chart in four years since Ed Sheeran’s “Divide”, and fastest-selling album by a group in eight years.

The last fastest-seller was One Direction’s “Midnight Memories” in November 2013.

READ ALSO: Abba’s new album has arrived – tell us, what do you think?

ABBA, propelled to global fame by their 1974 Eurovision Song Contest win with “Waterloo”, split in 1982, a year after their last album, “The Visitors”.

“Voyage” is their 10th number one album in the UK: only seven other acts — The Beatles, Elvis Presley, the Rolling Stones, Robbie Williams, Madonna, Bruce Springsteen and David Bowie — have had more.

The group said in a statement: “We are so happy that our fans seem to have enjoyed our new album as much as we enjoyed making it.

“We are absolutely over the moon to have an album at the top of the charts again.”

The 204,000 sales comprise 90 percent physical copies, including 29,900 on vinyl, making it the fastest-selling vinyl release of the 21st century.

The previous record holder was the Arctic Monkeys’ “Tranquility Base Hotel & Casino”, which sold 24,500 vinyl copies in 2018.