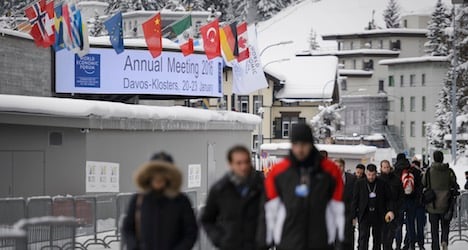 The heightened security threat was starkly in evidence in the Swiss ski resort itself, where police carrying machine guns are patrolling the streets and concrete blocks guard key venues.

Even as heads of state, billionaires and assorted celebrities were arriving, the International Monetary Fund (IMF) sounded the alarm on Tuesday about perils in the major emerging market economies and lowered its outlook for global economic growth this year.

None of the dozens of sessions in the four-day conference are officially dedicated to it, but the slowdown in Chinese growth is darkening the mood.

China's GDP grew at its slowest in a quarter of a century last year, the figures showed.

“The big event that I think has captured everyone's attention is the developments in China and in particular the fact that growth is slowing,” IHS chief economist Nariman Behravesh told AFP.

“They have made some mistakes,” he said.

“And they have added to the uncertainty and the volatility by their behaviour.”

China's problems will be discussed at Davos — “but they won't say it in public, they will say it in the hallways,” Behravesh said, noting that “the public Davos is a little different than the private Davos.”

That is exactly why 2,500 movers and shakers make their annual pilgrimage here — to discuss the biggest issues openly and, when they wish, far from the prying eyes of their domestic audiences.

US vice-president Joe Biden is expected to be the key speaker on Wednesday, laying out his vision of the turbulent times that the global economy is facing.

Europe's migrant crisis is also a theme running through this year's Davos.

German vice-chancellor Sigmar Gabriel and Swedish Prime Minister Stefan Loefven will take part in a debate Wednesday on how to integrate migrants, at a time when the fallout from the New Year's Eve sex attacks in Cologne
threaten Germany's open-armed approach to admitting hundreds of thousands of people.

The Open Forum format of their debate allows the public to ask questions on the hottest issue in Europe at the moment.

Later in the week, far-left Greek Prime Minister Alexis Tsipras locks horns once again with his bête noire, German Finance Minister Wolfgang Schäuble, in what promises to be an animated debate.

Argentine President Mauricio Macri will make his first appearance at Davos since his election in November, setting out his case for economic reform in a country with a turbulent recent past.

Afghan President Ashraf Ghani will seek understanding for his nation's ongoing unrest and on Thursday, Nigerian President Muhammadu Buhari is expected to face questions about his handling of the Boko Haram insurgency in Africa's most populous country.