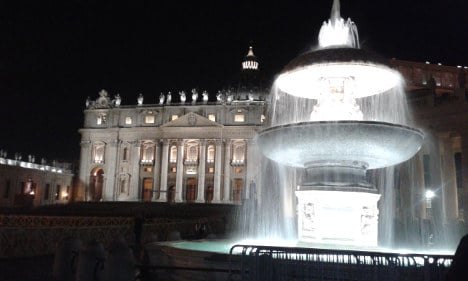 The woman gave birth on a square near the Vatican in the early hours of Wednesday. Photo: The Local Italy

The baby girl was delivered by a policewoman after passersby alerted officers that the 35-year-old Romanian woman had gone into labour, Il Messaggero reported.

The child, named Irene and weighing 2.9 kilograms, was born at around 2am on Piazza Pio XII, a small square off St Peter's Square.

The newborn and her mother, Maria Claudia, were then taken to the nearby Santo Spirito hospital, where they were paid a visit by the papal almoner, Archbishop Konrad Krajewski.

Krajewski, who was appointed almoner – a centuries-old role that involves helping the poor and needy – in November 2013, offered the woman and her daughter a year’s free accommodation at a nun's residence in the city’s Primavelle district.

Vatican spokesman Father Federico said Krajewski visited the woman because he knew her, while adding that he repeatedly offered her shelter but she refused.

Maria Claudia went to the square with her partner, a 40-year-old also from Romania, and other homeless people looking for shelter from the cold when she went into labour.

Many of Rome’s homeless sleep under the colonnades of St Peter’s Square each night.

Pope Francis has appointed Nathalie Becquart as undersecretary of the synod of bishops. She is the first woman to hold the post. Photo: AFP

Frenchwoman Nathalie Becquart is one of the two new undersecretaries named on Saturday to the synod, where she has been a consultant since 2019.

The appointment signals the pontiff's desire “for a greater participation of women in the process of discernment and decision-making in the church”, said Cardinal Mario Grech, the secretary-general of the synod.

“During the previous synods, the number of women participating as experts and listeners has increased,” he said.

“With the nomination of Sister Nathalie Becquart and her possibility of participating in voting, a door has opened.”

The synod is led by bishops and cardinals who have voting rights and also comprises experts who cannot vote, with the next gathering scheduled for autumn 2022.

A special synod on the Amazon in 2019 saw 35 female “auditors” invited to the assembly, but none could vote.

The Argentinian-born pope has signalled his wish to reform the synod and have women and laypeople play a greater role in the church.

He named Spaniard Luis Marin de San Martin as the other under undersecretary in the synod of bishops.

Becquart, 52, a member of the France-based Xaviere Sisters, has a master's degree in management from the prestigious HEC business school in Paris and studied in Boston before joining the order.